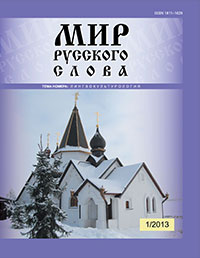 The ROPRYAL’s Plan of Activities for 2013

The MAPRYAL’s Plan of Activities for 2013

Igor V. Nefedov, Tatyana P. Nefedova
The Reflection of the Russian Language Lexis Systemacy in the First Monolingual Explanatory Dictionary of the Soviet Epoch (Devoted to the 140-year Anniversary of Professor Dmitry N. Ushakov)
The article is devoted to the creation of the first monolingual explanatory dictionary of the Soviet epoch edited by professor Dmitry N. Ushakov. The main principal used while the dictionary creating is the principal of normativeness which implies a special system of stylistic and grammar notes and a particular description of word meanings and details of meanings. The authors emphasize that the Ushakov’s dictionary furthered the enrichment of the Russian language and greatly affected the further development of Russian lexicography.
Keywords: monolingual explanatory dictionary, Russian language, principle of normativeness, lexis systemic, lexical meaning, synonyms, homonyms, antonyms, neologisms, stylistic marks, phraseological units, lexicography.

Tatyana P. Mlechko
Diaspora: Derivational Processes Against the Phenomenon of Evolution
The article deals with the current process of updating the derivational paradigm of the lexical unit “diaspora” in relation to the evolution of the phenomenon of diaspora. The analysis of the scientific texts and publications about diasporas in mass media has revealed a large number of derivatives that do not exist in dictionaries and lexicography studies, but actively participate in the formation of a new family of words which contains, among the other things, the competing options. The article provides the examples of using new units and cases of their thematic compatibility depending on the extralinguistic factors.
Keywords: derivational paradigm, productive suffixes, system of language.

Violetta M. Gryaznova
Nekrasovite Cossacks’ Patois: Appeal to the Previous Language Periods
The article covers the peculiarities of grammar system of Nekrasovite cossacks’ patois to define the obsolete words. The peculiarities of semantics and morphological explication of animateness and inanimateness, archaic effects in its functioning are defined in the article as well as the explication of continuity of grammar semantics of the noun. The later one is manifested in diffusivity of feminine and neuter grammemes, gender synonyms, change of gender grammeme and specificity of degrees of adjective formation and special cases of degrees of adjective meanings.
Keywords: grammar system of patois, semantics, Nekrasovite Cossacks.

Alexey D. Shmelyov
Russian Language and Culture: Areas of Contact and Ways of Study
The article covers the possibility of understanding Russian culture through the key words and expressions of Russian language. The author draws distinction between the disciplines that study the relationship and claims that a thorough semantic analysis is an essential prerequisite for any research in the area.
Keywords: semantic analysis, linguistic world view, linguoculturology, translation.

Irina V. Zykova
A Phraseological Sign with the Reference to the Extent of Its Cultural Memory
The paper sets out to corroborate the idea that the phraseological image provides the storage and accumulation of various types of cultural information. The assumption that due to its image basis a phraseological sign possesses a huge amount of cultural information which is generated as a result of five principal modes of world-cognition (archetypal, mythological, religious, philosophical and scientific) is advanced and verified.
Keywords: phraseological sign, cultural memory, conceptual sphere, culture.

Kira A. Rogova
On “Petersburg Text” in Modern Fiction (Entire Text Study Experience)
Composition and style analysis provided detects the dominating senses of Daniil A. Granin’s “Moy Leytenant” (“My Lieutenant”) parts and its prevailing themes (i.e. a person in the progress of the XX century events and Leningrad-Petersburg as an active background of the events and significant component of the characters’ mind). The novel organized chronologically.
Keywords: withdrawal, defense, period of famine, death and bombing, difficult way of returning to peaceful life, three narrators as a subjective outlook of the novel, soul and character of Piter, “we didn’t yield” — pride.

Natalya G. Babenko
New Page Of Petersburg Text: Poetics Of The Novel “The Time Of Women” By Helen Chizhova
The article covers such aspects of expressing author’s interpretation of the Petersburg text as a type of narrative, temporal and spatial organization of the text, representation of semantic oppositions “life / death”, “masculine / feminine”, “natural / cultural”, “own / others’”, “material / spiritual”.
Keywords: Petersburg text, Elena Chizhova, author’s interpretation.

Natalia A. Afanasyeva
Lexicographic Description of Traditional Poetic Images: To the Problem Statement
The article considers the problems of lexicographic description of traditional poetic images. It offers the modes of structuring a dictionary and vocabulary entries that are to help in research of dynamics of figurativeness in the Russian lyric poetry.
Keywords: Russian lyric poetry, poetic lexicography, poetic figurativeness, traditional poetic image.

Tatjana N. Soldatjenkova, Vladimir A. Zherebov
Traditions and Innovations in Russian as a Foreign Language: the Multiple Intelligence Approach
The following paper considers a link between the development of methods of teaching foreign languages and structural, functional, cognitive and communicative approaches in theoretical linguistics. The Multiple Intellect approach appears in the spotlight, as its development is of current interest in order to deal with the larger groups of students, which are most frequent in Russian as a foreign language teaching practice abroad. A methodological example, provided in the paper can be used as a practical material for teachers and above that, it provides the basis for development of such methodology.
Keywords: theoretical base and methodological interpretation, communicativeness and semantics of language, multiple intellect theory and its practical application.

XVIth Innokentiy Readings «Russia and China: verbalization of the cultural and spiritual meanings (to the 110th anniversary of Russian literature in China)»

V. I. Annushkin
XVIIth Internation Conference «Rhetoric and culture of communication in the public and educational space»