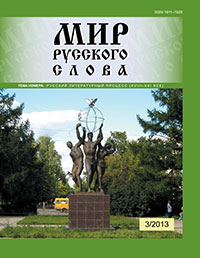 Valery M. Mokienko
Neologisation of Archaism: Much Cry and Little Wool
The article covers the etymology of “Much cry and little wool” expression used by Vladimir V. Putin in June, 2013. Though it was marked by Vladimir I. Dahl and used by several of Russian writers, it is not recorded nor in academic dictionaries, nor in explanatory dictionaries that testifies its periphery in modern use. Used by the President, it has got the second birth to the expression and is being widely used both in Russian media and abroad. The historical and etymological analysis detected German origin of the phraseological unit, which in its turn traces back to folk anecdote (Schwank) of the XV century.
Keywords: neologisation, archaism, phraseology.

Olga V. Stepushina
Credit and Loan Advertising as a Way of Money Understanding in the Russian Linguistic World Image
The article covers the concepts of money formed in modern society under the influence of credit and loan advertising. The advertising products classification of banks and credit institutes with respect to the nature of reported information and target audience is proposed. It is concluded that the features of submitting such a part of linguistic world image associated with the money as a credit and loan.
Keywords: money, credit, loan, advertising, Russian linguistic world image.

Tatiana S. Galkina
The Contextual Volume as a Condition of Implementation of a Sound Fragment of Evgeny I. Nosov’s Language Artistic Image of the World
The article is carried out within an anthropocentric approach. The sound here is considered as a detail of a language artistic picture of the literary world by E. I. Nosov. The analysis of a sound fragment is made at the syntactic level. In the  research the volume of a context, necessary for the realization of a concrete sound, comes to light. The following types of the contextual  volume are allocated: 1) the word; 2) the phrase (simple and compound); 3) the grammatical basis of a complex sentence.
Keywords: language artistic image of the world; sound fragment; contextual volume, compound phrase, complex sentence.

Nam Hye Hyun
Usage, Norms and System in the Context of Contemporary Russian Language: On the Material of the Internet Communication
This article covers the language usage in Internet communications in relation to the norms. There is a common attempt to destroy the standard codified language and to create its alternative through word play and experiments in the Russian-speaking Internet segment (RuNet). The author tried to prove that innovations in language usage in the Internet communications, in many cases, are the realization of the potential possibilities inherent in the system of language. One can find the accumulation of the most characteristic tendencies of the modern Russian language such as democratization, intellectualization and the strengthening of the personal viewpoint in the Internet communications.
Keywords: Internet-communication, norm, language play, meta-linguistic reflection.

Ludmila A. Kadzhaya
Special Scientific Discourse: Genre and Language Organization (on Hydrogeological Texts)
The article covers a communicatively expedient organization of the linguistic means at different levels of the specialized scientific discourse on the genre level. The regularities of speech objectification of one cognitive-communicative operation within a speech genre are considered. A demonstration analysis of lexical and grammatical means typical of Russian academic texts in the relevant subject area is given.
Keywords: discourse, speech system, speech genre, cognitive-communicative operation, text.

Nadezhda V. Glevkaia
Christmas and New Year in the Mass Media: the Speech Development of the Topic
The article covers the problem of a holiday as a social event and to the speech development of this topic. A lot of attention is paid to the analysis of the published Mass Media texts in order to define the main types of the speech-forms and the main meanings in which Christmas and New Year are shown to the reader in the newspapers. It is concluded that the topic of Christmas and New Year (in the texts published in the “Izvestia” newspaper) is mainly represented on the basis of the event semantics.
Keywords: holiday, Christmas, New Year, speech development, speech-forms, types of meaning, event semantics, subject semantics, actual semantics.

Nadezhda I. Pavlova
Can the Female’s Letter be Read? Stating the Problem of Gender Oriented Narratology
The article is devoted to the problems in the study of female’s textual practices and modes of expression of the female subject in literature. The object of the research focus is the concept of female’s writing, established in feminist literary criticism under the poststructuralism influence and caused vivid discussions. They are closely related not only to the content of the concept, but also to the theoretical and methodological contradictions in this field of research. An attempt was made to substantiate the prospects of using the concept of female’s writing in order to study of further exploring the phenomenon of the authorship in Gender studies.
Keywords: female’s writing, female’s authorship, identity, feminist literary criticism, Gender studies, narratology.

Roman M. Perelshtein
The Abandoned Things World in Joseph Ye. Heifitz’s “The Lady with the Dog”
One of the leitmotifs in Joseph Ye. Heifitz’s “The Lady with the Dog” is the world of the abandoned things. An abandoned bottle, a dropped glove, an empty ink-pot are all the evidences of the arithmetical mean value being. The measure of the things abandonment is vain relations nature. The things holders are either rest or are burdened by routine. The rest as well as the routine things turn into spirit poverty and death. The sign of entropy covers everything and the things most of all. Inserting the visible thing in the “The Lady with the Dog” short novel, Joseph Ye. Heifitz manages to watch the deep sense of Chekhov’s word.
Keywords: game, reality, thing, spontaneity, mechanicalness.

Anatoliy Yu. Ustinov, Tatiana A. Chabanets
The Study of Epistemological Units Through The Russian Toponymic Space
The article covers the necessity and possibility of studying Russian epistemological units by foreign students through the toponymic space of the Western Caucasus. The proposed method is based on the use of three types of texts, each of them solves specific training tasks.
Keywords: epistemological approach, epistemological unit, the toponym Tmutarakan.

Eugenia V. Kolchinskaya
On the Crossroad of Languages and Cultures
The article covers methods of the Russian language teaching in Diaspora that has basic principles: to train pupils to make them think not verbally but with help of conceptions; to pass over from social approach for tourists to problematic; teaching should comprise culturelogical and philological aspects; to rely on the complex approach which includes various linguistic levels. Such method of teaching the Russian language in Israel will promote keeping the native language in Diaspora and decide the problem of teaching the native language in Diaspora.
Keywords: notions concepts, cultural context, lingual picture of the world, dialogue of languages and cultures, bilinguism.

N. S. Tsvetova
Experience of the «Immanent overcoming of the word»

A. V. Kovtun
Science history on the Philological faculty of the Tver’ State University (short essay)