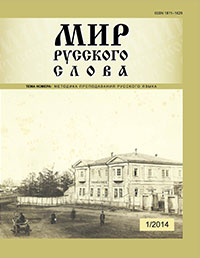 The ROPRYAL’s Plan of Activities for 2014

The MAPRYAL’s Plan of Activities for 2014

Elena E. Pchelintseva
On Appropriateness of the Verbal Nouns Use
The functions of transposition as well as the reasons for selecting (instead of verbal constructions) and some other peculiarities of their usage in the contemporary Russian speech are analyzed in connection to their role in establishing the functional sentence perspective.
Keywords: verbal noun, deverbativ, transposition.

Yulia M. Konyaeva
Expression of Dialogic in the PR-text (on the Material of By-Liner)
The article is devoted to the study of the dialogic nature of PR-text. As a material for the research we used texts written in the genre of by-liner. As the main markers of dialogic highlighted targeting expressed herein speech positions of all participants of communication, as well as proper linguistic means of expression dialogic relations.
Keywords: PR-text, dialogic, targeting and response, speech position.

Nadezhda A. Azarenko
The Orthodox Metaphorization of Characters as the Way of Organization of F. M. Dostoevsky’s “Idiot”: Linguistic Introduction
The article covers the linguistic representation of the author’s original metaphor expressed as “Mishkin, the Jesus Christ” in Dostoevsky’s “Idiot”. Decipher of the metaphoric pattern being relevant to the author’s plan, it is not only Dostoevsky’s Orthodox world view than can be explored, but the very sense he had intended for the readers via the second novel of the Great Pentateuch.
Keywords: cognitive metaphor, metaphoric patterns, world view, Jesus Christ.

Natalie Malinin
Oral Speech in the Text of the Modern Russian Story
The article refers linguistic peculiarities of the modern story, oral speech oriented. The speech introduces specific character of its structure with not disturbing the principles of belles-lettres text construction.
Keywords: oral speech, belles-lettres text, linguistic peculiarities of the modern story.

Yuliana A. Orlova
Images and Meanings in the Mark A. Aldanov’s story “Belvedere Torso”
The author explores the Mark A. Aldanov’s story “Belvedere Torso” (1936). The meanings of art, love, life became a subject of story. Revealing the problems of Art and Artist, Creator and Creation, Talent and Envious Aldanov established ideas about famous historical figures — Michelangelo, Vasari — artistic complicating them, bringing their images inconsistency, ambiguity. Author examines the cultural context of the time: the life and relationships of artists, writers, scholars, clergy, contemporaries of Michelangelo. The author managed to delve into the psychology of a man of the past and reach an understanding of psychology, philosophy, and the meaning of human life in general.
Keywords: historical and philosophical novel, image, historical characters, the author’s concept.

Alexander V. Korotyshev
“Adaptation Matrix” as a Sets Complex for Selection and Adaptation of a Literary Texts in Russian for Foreigners Teaching
The article considers ways for literary text selection in teaching Russian as a foreign language with respect to key parameters of text and readers. So-termed «matrix of adaptation» allows to reveal interaction between these parameters, thus enabling to forecast readers’ response to a specific quality of texts and improve efficiency of text selection.
Keywords: adaptation, readability, selecting literary texts.

RUSSIAN LANGUAGE AND LITERATURE AT SCHOOL

Anna V. Volodina
Ways of Poetic Text Interpretation: On a Graphic Image of a Poem
The author offers to analyze a graphic image which can be the keypoint of both a poet’s biography and peculiarities of literacy lead study. Thus, emblem features reside in Baroque taste of a poem, while allusions reside  in romantic graphics and freedom of usual norms in futuristic one.
Keywords: graphic image of a poem, emblem poems, romantic real and imaginary worlds, futuristic epatage.

Nadezhda V. Lyubavskaya
From Pedagogical Studious to Children Literacy Art Festival (On Development of Attention to Native Language and Students’ Creativity Development)
This article covers the technology of pedagogical studios for learning Russian language and literature. Submitted the sequence of this program (including interesting examples), outlined the ways of its adaptation in a normal School. The article also includes the information about the connection of this technology and organizing festivals of children’s writing creativity.
Keywords: studio, speech, word, creativity, festival.

Science and Practical Session of “MAPRYAL to Russian World”