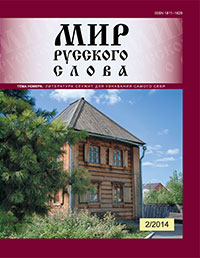 Victoria V. Krasnykh
Lingual-Cognitive Nature of the Phenomenon of Reproducibility in the Psycho-Lingual-Cultural Studies
The phenomenon of reproducibility through the prism of a new research discipline — psycho-lingual-cultural studies — is focus of the article. The paper also presents the object of the discipline as an unmerged unity “language — mind — culture — linguo-culture — human — community — communication”.
Keywords: culture, linguo-culture, psycho-lingual-cultural studies, reproducibility, image

Violetta M. Gryaznova
Specific Peculiarities of Verb Morphology of the Island Dialect of Nekrasov Cossacks-Old Believers
The article detects and defines the specific traits of verb grammar system of the dialect of Nekrasov cossacks-old believers. Use of nationwide language system resources that leads to widening and enlargement of the morphological system of the verb dialect, use of archaic resources of nationwide language, breach of non-global prohibition in the frame of this or that categorial verbal form, process of analogic phonetics and phonology stem adjustment, process of infinitive and forms of the verb of the same category are researched.
Keywords: Nekrasov Cossacks, dialect, grammar system, verb.

Vladimir K. Lebedev
“It Happens so that I Live in Peredelkino”, or Some Aspects of the Toponyms’ Declension
The paper deals with the declension of the toponyms ending in ovo(evo), -ino(yno) in the texts of the Russian writers and everyday language from the early nineteenth century to the present.
Keywords: declension, toponyms.

Kirill S. Filatov
The Role of Metaphors in the Semantic Explication of a Journalistic Text
The article concerns to the peculiarities of the metaphorical deployment of journalistic texts. It clarifies the coordination between syntactic position of metaphor and the semantic movement of the whole text and identifies specific techniques for organization of journalistic texts by using metaphors. It is concluded that in some publicistic texts figural dominant presents the result of cognitive activity of journalist simultaneously spreading estimating semes to the entire text.
Keywords: metaphor, text explication, functional sentence perspective.

Alexander V. Kalashnikov
The Surname of Shakespeare as an Example of Transferring the Inner form of the Name In Academic Prose
The paper represents the cases of interpretation and puns with the name of Shakespeare regarding the semantics of the Russian equivalents transferring the inner form of the name: Kop’ev, potryasayushchiy kop’em, potryasat’ kop’em, potryasatel’ kop’ya and its spelling in Russian. The research shows that expressing the characteristics implied by foreign names set in an appropriate context in Russian academic literature and literary criticism has had a long tradition which presupposes the necessity to render the meanings of the morphemes contained in the names of notable people.
Keywords: Shakespeare, Shake-scene, pun, translation, onomastics, stylistics, academic prose.

Maria K. Kuzmina
Towards the Meaning of Concealed Quotations In Ancient Russian Hagiography
The article concerns analysis of the phenomenon of concealed biblical quotations in ancient Russian literature of saints’ lives of XV–XVI centuries. The author makes an attempt to ascertain the index of probable senses which are to be injected into the text of lives by quotations, staying secret towards the majority of readers, but excellently understood by professional scribes. One of such senses is an idea of relation between a character of a saint and a patronal festival of a monastery, established by him.
Keywords: intertext, concealed quotations, biblical ptototype, self-actualization of ancient Russian authors, conceptual paradigms of ancient Russian hagiography.

Olga G. Zgurskaya
“Will be My Fate Decided, I am Getting Married…” (prospective reminiscences in Pushkin’s works)
The paper deals with the possibility of reflection of author’s foresight of his own destiny in a literary work. The usual conception of the retrospective character of the connection between life events and their creative reflection are being replenished also by possibility of prospective, predictive character.
Keywords: reminiscences, propheticism, epistolary, prose of A. Pushkin.

Anna G. Podporkina
Melodramatic Motives in Dostoevsky’s Novel “The Gambler”
This article is dealing with the problem of melodramatics outside the context of genre as universal ahistoric and undated category. The study discovers melodramatic motives’ functioning in Dostoyevsky’s «The Gambler» novel: unexpected turns of a plot and «on the verge» situations open something new in characters, giving them a kind of inner «illumination». Melodramatics in «The Gambler» novel, which has deep connection with category of catharsis, is the principal literary device, revealing characters’ inner world and undercover depths of their psychology.
Keywords: F. M. Dostoevsky, «The Gambler», melodrama, melodramatics, motive, psychologism, catharsis, game, fate, vaudeville, unexpected turn of a plot.

Maxim L. Fedorov
«The Seagull» Anton P. Chekhov: Experience of Reading by the Choreographer
The article is devoted to the analysis of the John Neumeier’s ballet based on the play of Chekhov «Seagull». Interest to a detail, whether it be «the real world» or a detail of a symbolic and metaphorical row is the major for the choreographer course in comprehension of poetics of the play. Two main subjects of the Chekhovian primary source — «five poods of love» and new forms in art — subordinate both composition and scenography, as well as a choice of a musical material. The very tectonics of performance is formed by two inserted ballets, between them — the separate stage setting opening hardly designated at Chekhov history of Nina on a scene of provincial theater. The similar composition is answered also by scenography and carefully thought over suits.
Keywords: dramatic art, ballet, choreography, Anton P. Chekhov, John Neumeier.

Marina N. Zlygosteva
Technologies and Methods of Productive Learning as a Means of Development of Communicative Competence
The article is devoted to the problem of the student intellectual activation on lectures and seminars. Range of technologies and methods which implement the model of productive learning and help to develop communicative competence are described in the paper.
Keywords: productive education, educational technologies, technology of active education, activation of thinking, troubled education, developing training, the activity approach, collective essay.

Larisa V. Sokolova, Rafael Guzmán Tirado
Russian-Spanish Intercultural Dialogue (theoretical principals and structure of the nationally orientated textbook for reading and perfection of spoken habits for Spanish students “Russia and Spain: dialog of cultures”)
The paper deals with the theoretical principles of intercultural communication textbooks. Particular attention is paid to dialogue of two cultures, presented as a dialog of texts in a new textbook “Russia — Spain: dialogue of cultures” which is addressed to Spanish students.
Keywords: Russian, Spanish, intercultural communication, textbook.

Decembrist as a Personality