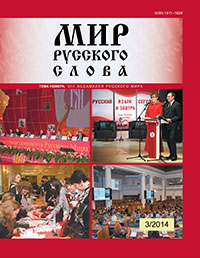 VIII Assembly of the Russian World

Irina N. Korsunova
Structural-Semantic Features of Phraseological Units Containing Abstract Nouns with Actual Deixis Value in Its Composition
The article considers the group of phraseological units which are composed of abstract nouns with actual deixis value. Categorical and formal indicators of such idioms and their lexical meaning are analyzed on the basis of lexicographic representation of the data of the language units.
Keywords: noun, deixis, idioms, lexical meaning.

Maria N. Dmitrieva
The Meaning of the Word Whitsun According to Dictionaries
This article covers the denominations description of the religious orthodox calendar and revelation of possible dynamics in semantics of separate clue nominations according to sources of linguistic and informative character data. The author attempts to determine the semantics of units Trinity and Pentecost in the conception of modern Russian language native speaker, based on free associative experiment.
Keywords: Whitsun, Pentecost, lexical unit, dynamics, vocabulary entry, linguoculturology, semantics.

Tatjana B. Iljinskaya
Poet and Scientist Alexander Ye. Fersmann and the Problem of a Modern Scientific Language
The article gives the linguostylistic analysis of the scientific prose of Alexander E. Fersmann that possesses such peculiarities as laconicism, figurativeness, stress on the verbs, energetic and clear syntax. The given peculiarities emphasize the features of a modern scientific language: lots of bureaucratese and intricate syntax.
Keywords: Alexander E. Fersmann, scientific style, fiction, metaphor, bureaucratese.

Alexander P. Skovorodnikov
To Definition of the Term “Linguocynism”
On the basis of studying the lexicographic sources a definition of cynicism the term “linguocinism” is given in the article. The meaning of this term is specified by its correlation with similar to its meaning, but not synonymous to the terms “vulgarisms” and “obscenism”. It became clear that vulgarisms and obscenisms being violation of ethic-linguistic norm are not always linguocinisms. Linguistic means of expressing linguocinism and the role of context in their realization are revealed.
Keywords: cynicism, linguocinism, vulgarisms, obscenism, language means, context, speech ethics.

Ekaterina A. Ivanova
Linguoculturological Potential of Ye. Vodolazkin’s novel «Lavr»
The problems of the usage of Ye. Vodolazkin’s novel “Lavr” in linguoculturalogical aims, during Russian as foreign language classes, are being depicted in this article. The most expedient topics, situations, realities and text blocks for classes and extracurricular work are examined.
Keywords: linguoculturalogical potential, the Middle Ages, themes, situations, realities, the image of a doctor, healer, saint.

Rimma M. Teremova, Valentina L. Gavrilova
Project-Based Learning from the Perspective of Interactive and Communicative Organization of Russian as a Foreign Language Teaching Process
The article deals with the project-based method which provides an interactive mode of teaching Russian as a foreign language. Implementation of project activities in training practice is encouraged by creating new generation manuals that methodically provide students’ presentations on problem topics in the form of discussion in conversation and linguoculturology classes.
Keywords: interactive and communicative organization of teaching process, project-based learning and the ways of its realization, principle of interactivity, new generation textbooks.

Andrey A. Ostapenko, Vyacheslav V. Gouzeev
Methodology Basis of Teaching Children Writing in Russian as a Non-Native Language
A model of forming a formal and functional Russian reading and writing of non-native Language children is presented. It is made on basis of analysis of sequence of forming purposeful and motor component of literate writing skill. The factors affecting the peculiarities of Russian literate writing skills forming within the non-Russian speaking children are revealed. The above mentioned peculiarities are analyzed subject to the index of similarity of native and Russian languages, type of graphics of native language and occurrence or absence of bilingualism.
Keywords: non-Russian language speaking children, writing literacy, Russian language, sequence of speech skills, formal literacy, functional literacy.

Аlina Yu. Maslova, Тatiana I. Mochalova
Growing Linguistic and Communicative Competences Among Philology Students in the Practice of Teaching Russian as a Foreign Language
The paper concerns topical issues pertaining to specifics of teaching Russian as a foreign language in a multicultural environment of the Republic of Mordovia and highlights reasons causingcross-language interference errors among bilingual students’ oral and written speech.
Keywords: Russian as a foreign language, bilingualism, polylingual, communicative competence, cross-language interference, Finno-Ugric languages.

Sacred to the memory of Tatiana B. Dianova

Inna S. Shulgina
Lermontov’s Pyatigorsk in Modern Literature Perception
The article reveals the perception of Pyatigorsk by Lermontov as the main locus of the North Caucasus and the interpretation of his creativity in the works of contemporary European and Russian writers.
Keywords: Lermontov, Pyatigorsk, «Caucasian text» interpretation parody.