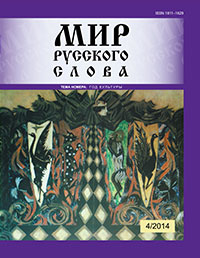 Decree «About preservation and development of the Russian language, enhancement of its role in the area of the International cultural and humanitarian relations»

Mikhail Ya. Dymarsky
Functional Sentence Perspective and Intonation Pattern of the Russian Speech Model {Так вот + [вопр. предл.]!}
The work is based on the original concept of three-level system of syntactic models, i. e. 1) basic language models (cf. “N1 Vf” — “Самолет летит” / “The jet flies” which provides a number of communicative variations), 2) speech syntactic models (cf. “Это / N1 Vf” — “Это / самолет летит” / [there is no straight English equivalent, ≈ “This is a jet flying”], where the functional sentence perspective and the word order are partly fixed, since Это may function only as the theme and always occupies the first place), and 3) utterance models (cf. “{вводн.когн. [(А, Так) это // N1 \ Vf!]}” — “А, так это, оказывается, // самолет \ летит!” / ≈ “Ah, so this is // a jet \ flying!”, where the functional sentence perspective, the word order and the certain words are strongly fixed which makes the model ready to function in a strictly prescribed type of communicative situations). The paper deals with a fragment of the microsystem of Russian identifying speech and utterance models. Against the background of a short general characteristics of the model “{Так вот + [вопр. предл.]!}” (“Так вот где таилась погибель моя!” ≈ “So this is where my death was hiding!”; “Так вот о чем ты думаешь!” ≈ “So this is what you’re thinking about!”) its functional sentence perspective and its intonation pattern are considered which possess some fixed features: metathesis of the theme and the rheme, the emphatic character of the rheme accent falling on the fusion “ВОТ + вопр.-отн. мест.”. The cases of deviation from this prototype: the emergence of secondary accents at the theme components — and the reasons for such deviations are analyzed.
Keywords: three-level system of syntactic models, basic language model, speech syntactic model, utterance model, identifying utterances, functional sentence perspective, intonation pattern.

Olga Yu. Avdevnina
Structural and Semantic Peculiarities and Cognitive Potential of Nominative Constructions with “вот” (“here is”)
The nominative constructions with “вот” (“here is”) specificity is that its origin and functioning is connected with the linguistic representation of the psychological process of the perception. The perceptual conditionality of these units determines grammatical interpretation and cognitive content, in particular, its participation in the forming of the linguistic and artistic picture of the world.
Keywords: perception, deixis, nominative construction, demonstrative article, nomination.

Marina A. Droga
The Proper Noun in a Newspaper (on Russian compound names material)
The article is devoted to the study of a proper noun which is a part of a composite name. The analysis of newspaper texts has shown that proper noun as a component of a composite category in the headlines of newspaper articles is rather frequent. Proper names in this case can be signs of famous people, great events and to act as a source of precedent.
Keywords: newspaper language, headline, proper noun, case name, compound names.

Karina N. Galay, Anna V. Zhuchkova
The Typological Classification and the Symbolical Value of Anthropomorphous Images of the Frog Prince and Tsarevna Frog
Animalistic images play an important role in mythology, folklore and literature. Some types of animalistic images are allocated: zoomorfny images, anthropomorphous images, characters werewolves and turning-around heroes. Images of Tsarevna Frog from a Russian fairy tale and the Frog Prince from a German fairy tale don’t correspond to this typology. We come to a conclusion that its psychological and philosophical symbolical value is substantial quality of the image in fairy tales.
Keywords: animalistic images, zoomorphism, anthropomorphism, oborotnichestvo, reversing, personal growth, egoism.

Iuliia A. Voronina
Anton P. Chekhov’s Short Story “Student” in the Italian audience
The article is devoted to the stylistic analysis of Anton P. Chekhov’s short story “Student”, as a tale based on the observation of the functioning of linguistic resources. The work allows us to follow the formation of the meaning of a text and to analyze the translation of the tale into Italian in view of its submission to the Italian audience. The Italian translator of the tale is Alfredo Polledro (1956): his translation is characterized by maximum lexical precision, but needs the support of a wider lexical and semantic analysis of untranslatable words and Church Slavonic vocabulary during the learning process.
Keywords: composition of the tale, semantic analysis, church Slavonic words, Italian translation, linguistic and cultural analysis, untranslatable words.

Darya A. Shchukina
Travelling along “The Russian Switzerland”
The paper deals with some peculiarities of the text narrating about a travel, fiction and documental description parameters are being singled out. The modern writer Mikhail Shishkin’s book “The Russian Switzerland” is introduced with the support on information analysis inserted by the means of citation and other intertextual inclusions.
Keywords: travelling, fiction and documental description, citation, intertextual inclusions.

Sergey M. Pronchenko
Proper Nouns Types and Their Functions in the Cycle of «The Tales about Italy» By Maxim Gorky
The article is devoted to the onomastics of a literary text. It considers the typology of proper names and their functions on the material of the series «The Tales about Italy», created by the outstanding Russian writer Maxim Gorky (1868–1936).The study reflects the results of the applying of the systematic approach to the study of Gorky’s names and reveals the paradigmatic and syntagmatic aspects of their analysis.
Keywords: M. Gorky, poetonyms, the systematic approach, syntagmatics, paradigmatics.

Irina V. Odintsova
The problem of Object and Subject in Science. Russian as Foreign Language as a Subject of Linguistic Research
Philosophical categories of object and subject of scientific activity are analyzed in the article. The linguistic aspect of «Russian as a foreign language» is considered as an independent object of linguistic science. The examples proving identity of this subject are given.
Keywords: object, subject, Russian as a foreign language, linguistic aspect.

Alexander V. Korotyshev
In Search of “Adaptation Itinerary”: Preparation of Literary Text for Foreign Language Class
The present article focuses on typical problems arising during implementation of literary texts into the process of language teaching and demonstrates approaches to predicative structure mapping that afford to reveal key conceptual blocks and determine which text elements and to which extent can be subjected to adaptation.
Keywords: adaptation, authenticity, notional milestones, predicative structure, methods of adaptation.