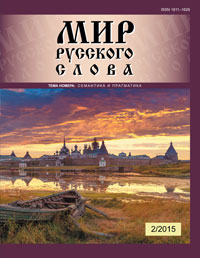 Victor I. Shakhovskiy
Synergy of a Word in Semasiological Semiotics of the Language
The article focuses on new ways and means of sense, word derivations / transformations as a sign of language answer to modern society calls. A special attention is payed to the circlelike way of language lexical usage in chronotope, namely to a long out of date words and word combinations return, to their reproduction in new social and cultural communicative situations. The author makes conclusion of an intensive synergy of new mass-media derivatives and returned to active usage the out of date lexemes. Differentiation among communication, information and propaganda through the damaged focus of information translation and perception is made. The author makes emphasis upon ecological compatibility and incompatibility of the journalistic word creativity. Illustrated are all theoretical postulates by new examples.
Keywords: sense, word derivations / transformations, circlelike way of language lexical usage in chronotope, circlelike language dynamics, synergy, wronged focus of information, ecological (in) compatibility of language usage, communicative risks.

Alla V. Velichko
Law of Economy As a Condition of Language Functioning and Development
This article discusses the principles of the law of economy at different levels of language — in phonetics, vocabulary, word formation, morphology and syntax. It analyzes the importance of the principles of economy for the development of the language and its correct functioning. Towards standard trend is considered in detail.
Keywords: law of economy, development of language, the functioning of language, standard (reproducible) statements.

Igor N. Apoukhtin
Mediatext Changing Under the Influence of Mass Media Convergence Process
The article discusses some aspects of the changing texts of the print media as a result of the convergence process associated with the change in the technical basis. Translation of printed media to a digital code (digitalization), on the one hand, expands the possibilities of presentation of information, on the other hand, work with journalistic information on the Internet is significantly different from the common perception of texts in newspapers or magazines. In addition, the unboundedness of printed area on the Internet leads to the appearance of the author’s versions of the text, which have reduced the requirements to the speech norms of presentation. Since the convergence process and rapid publication of journals in the Internet consists of little more than twenty years, this area remains largely unstudied, besides the rapid development of technical means of receiving, processing and publication of information by the journalist leads to constant development and change methods and techniques of his work, which also has an impact on the final media texts. As an example we consider the materials of the two editions of network news Agency and magazine, which has a printed version, and examines some aspects of their perception.
Keywords: media, rich information space, convergence, podcast, the development of the cognitive base of the recipient.

Olga I. Kolesnikova
Creative Ways of Understanding of Modern Literature in Media Discourse and Pragmatic Conditions of a Reader’s Interpretation
The author refers to the creative elements of the speech as the evidence of media discourse, created to assess the state of modern literature gifted native speakers, and tries to identify the conditions for their adequate interpretation in readers’ minds. The electronic media shows the features of the creative conceptualization of literary life in different ways and forms. The main factor in their interpretation of pragmatic acts art-language competence of the subject’s perception of speech, part of the reader’s culture. The essence of the strategy, in line with the pragmatic and esthetic strategy that implements this competence.
Keywords: a discourse on literature, the pragmaaesthetic strategy of the reader, the art-language competence, verbal creativity.

Tatiana E. Vladimirova
The Concept “Brother” As an Archetype of Russian Language Being
This article refers to the most ancient stratum of the Russian language picture of the word: the terms of relationship in order to discover ethno-specific peculiarity of Russian language mentality. This article focuses mainly on the concept “brother”, causing some difficulties in intercultural communication. Particular attention is paid to changes in the semantics of the initial Indo-European form up to its functioning in modern speech of native speakers.
Keywords: term of relationship, mentality, being, intercultural communication.

Alexander N. Belarev
The Travel to the Novaya Zemlya in the Novel of Paul Scheerbart «I love you!»
The paper deals with the Russia travel in the novel «I love you!» written by German fantast Paul Sheerbart (1863–1915). The travel to the archipelago Novaja Zemlya in the novel is a way to realize the program of earth, society and personality transformation. The paper shows, how the Russia-travel theme is connected with problems discussed in the novel. The Russian travel in this novel continues the tradition of fictional travels. The cosmic world view of Scheerbart is juxtaposed to the ideas of Russian cosmism.
Keywords: Scheerbart, Novaya Zemlya, Russian cosmism, travel, island.

Oksana M. Krizhovetskaya
Retrospective Context of the Literary Text of Mass Culture: Reactualization and Experience of Reconstruction of the Novel Narrative
The article presents a study on the specificity of mass popular literature texts which formalizes the most productive basic models of classic prose. Assuming that the existence and reading of contemporary mass popular literature is to be considered within the frame of both current and retrospective literary processes, the author explores a classic novel narrative in correlation with the narrative structures of the contemporary mass popular literature. The author examines theoretical approaches to mass literary genres. Historical modifications of a novel narrative are traced by the examples of several classic novels. Analyzing basic actantial and narrative models of a novel, the author shows that the main stages of narrative text expansion are largely structurally identical for both classic and modern models. A structural method developed and presented by Vladimir Ya. Propp in his tale morphology research is used for the description of historical modifications of a novel narrative.
Keywords: modern mass literature, formulaic literature, actantial and narrative model, classic literature, novel, structure, fiction, narratology, narrative, literary text.

Irina V. Rebrova
Illustration of the Opposition of “Native” and “Alein” in the Literary-Critical Discourse of the First Wave of Russian Emigration Using the Example of the Literary Legacy of Alexander Herzen
This article examines both the fifth chapter of Alexander Herzen’s literary memoirs “My Past and Thoughts” and reviews of the work in Russian émigré periodicals of the 1920s from two angles a) the primary level of the text and b) the content level of the text, that is, the literary-critical discourse. This article argues that Herzen is not only an important figure of that epoch, but also an important link in both the system and structure of discourse / linguistic genre / style /authorial style. This article identifies those values that shaped the collective memory of the “first wave of Russian emigration” as a social group. Furthermore, at the boundaries of the opposition between “our” and “other,” it identifies important and opposing forces in the make-up of the cognitive consciousness of one ethnos.
Keywords: literary genre, linguistic genre, types of texts, functional-semantic type of speech description, literary-critical discourse, opposition “native” and “alein”.

Laila Paracchini
Relations Between the Category of Modality and the Figurative Meaning of the Verb Tense and Mood in the Study of Russian as Foreign Language
The article analyzes relations between the semantic category of modality and the grammatical features of verb tense and mood. A particular attention is paid to the structures in which the grammatical categories of verb tense and mood transmit a figurative meaning. Considering the difficulties that no Russian speakers can meet in using this type of constructions, the article offers also a structured approach to the explanation and the training of these structures in a course of Russian language as foreign language.
Keywords: cathegory of modality, figurative meaning of verb tense and mood, deontic modality, epistemic modality, dynamic modality, negative modality, Russian language as foreign language, teaching of Russian as foreign language.

Cheslav A. Horbachevsky
The Motives of Lost Illusions and Silence in Literature Texts of Kolyma Prisoners
The article analyzes the poems by Varlam Shalamov, Helena Tager, Nina Hagen-Thorn, Elena Vladimirova. The main attention has been focused on the typological connections between poetry and prose of 40th–70th. XX century. The texts have been devoted to the Kolyma camps of forced labor mainly. Principal motives in the diverse analyzed texts are lost time and lost illusions motives.
Keywords: lyrical character, motive, a poem, an allusion, Kolyma.

Vyacheslav V. Umnyagin
Nature Perception in Solovki Prisoners’ Memoirs
The article describes a variety of patterns manifested in nature description of Solovki prisoners’ memoirs. In their texts, nature is portrayed as a research, esthetic, moral and spiritual phenomenon. The analysis of nature characteristics lets the reader make conclusions about the authors’ feelings and emotions, as well as about the ethic, social and cultural context of the historical period.
Keywords: Solovki, Solovetsky monastery, Solovki prison, nature, memoirs, GULAG.