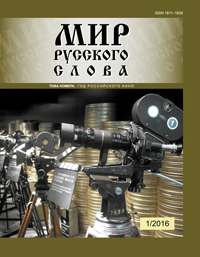 ROPRYAL Plan of Events for 2016

MAPRYAL Plan of Events for 2016

O. V. Nikitin
Forgotten Card Index, or a History of Russian “Larousse”
The article presents and analyzes some little-known facts from the history of Russian lexicography of the 1920s linked to the attempt to create the first explanatory dictionary of the Russian language. The work describes the composition, sources and organizational principles of this thesaurus, authors’ discussion, the circumstances of external influence on the participants of the project. The author is evaluating all this work. Rare archival materials from Moscow and St. Petersburg collections are involved.
Keywords: lexicography, dictionary, ideology in linguistics, discussions in linguistics, theory and practice of dictionary work, vocabulary card index.

A. Pavlenko
Russian as a Lingua Franca in the Global Service Industry
The purpose of the article is to analyze the role of the Russian language in the era of globalization. Based on fieldwork conducted in eleven countries, the study shows that Russian became one of the most popular and widely used foreign languages — after English — in the global service industry. From the point of view of contemporary sociolinguistic theory, Russian language has become not only the object of national pride but a form of symbolic capital that could be converted into economic capital. The author argues that this transitional moment opens up new opportunities for teachers and researchers studying Russian abroad.
Keywords: globalization, linguistic market, commodification, lingua franca.

Sh. V. de C. Grillo, M. S. Glushkova
Scientific Popularization in Brazil and Russia: Comparative Analysis of Discourses
The theoretical and methodological basis of this article was built at the juncture of Bakhtin’s theory and the comparative discourse analysis, presented in the works of the Cediscor Centre researchers. The authors have constructed a corpus of utterances, taken from Brazilian and Russian popular scientific magazines, including Scientific American magazine, existing in both countries, and have observed significant similarities in the genre of popular science article, as well as differences in the presentation and evaluation of the peritextual information, in their images, introductory article, etc.
Keywords: scientific popularization, comparative discourse analysis, science journalism, Bakhtin studies.

A. V. Korolkova
The Semantic Field of “Tragic Perception of Reality” in Russian 20th  Century Aphorisms
Since the times of Kievan Rus, Russian aphorisms have been reflecting the value-semantic guidelines of Russian culture. Over the centuries, the semantic field of Russian aphorisms showed the development of the value paradigm of national culture by reflecting people’s linguistic mentality. The author pays attention to the “tragic perception of reality” semantic field, and proves that the aphorisms of the second half of the 20th century tend to look pessimistically and even tragically to the contemporary trends and to the surrounding reality.
Keywords: aphorisms, “tragic perception of reality” semantic field.

O. T. Gasparian
Culture Code as a Tool for Realization of Selling Intention in Modern Advertisement
The article reveals a role of a culture code in modern advertisement. The complication of the market structures and potential customer’s behavior leads to the changes in advertisement text, from a simple information to different manipulations and becoming a part of culture. Processing of the culture code in ad narrative allows the customer to form a new range of stereotypes, making a decision process easier and creating long-term relations with multiple economic activities involved. An ad copy demands to be included to and comply with the culture code of particular communities or target audiences. The success of an ad copy is measured by reaching of a meta-goal — to be included to the culture of particular community. After that an advertisement acquires intrinsic value necessary for the next circle of meaning generation in modern culture.
Keywords: advertisement; ad copy, intentional method, culture code, stereotypes.

A. O. Bolshev
“Russian text”: a Problem Statement
The concept of “St. Petersburg text”, offered by V. N. Toporov, opens up the possibility to find within a regional or national culture a certain semantic center, a ‘Supertext’, a set of works having much in common and embodying the deep metaphysical essence of this culture. The author proves the validity of the statement of such a question towards the “Russian text”, the structural and semantic integrity, concentrating the spiritual and transcendental idea of Russia and connected to the Russian literature by approximately the same kind of relationships as “St. Petersburg text” to St. Petersburg literature.
Keywords: Russian text, the metaphysical essence, aspiration toward the transcendent, household freedom.

D. O. Machilskaya
Beginning as a Category of Literary Text
The article is devoted to the study of the literary text’s beginning in terms of language patterns organization of it. By way of example of A. Chekhov’s and V. Shukshin’s short stories the author distinguishes categorial features typical for ‘absolute beginning’.
Keywords: the beginning of the literary work, content, form, opposition relations.

A. A. Zlobin
Functioning of Precedential Phenomena in A. Solzhenitsin’s Novel “The First Circle”
The article deals with the peculiarities of precedential phenomena understood as materialized sings of intertextuality. The author has presented the classifications and functions of this linguistics units in the structure of A. Solzhenitsyn’s novel “The First Circle”.
Кеywords: precendential phenomena, intertextuality, source field, А. Solzhenitsyn.

A. G. Lileeva
The concept of “Word” in M. Shishkin’s novel “Maidenhair”
The article refers to the interpretation in the Russian as a foreign language class of some fragments from the Mikhail Shishkin’s novel “Maidenhair”. The analysis is based on the description of the novel’s key concept of “Word”.
Keywords: literary text; the principles of analysis in Russian as a foreign language class; concept; lexico-thematic fields.

E. V. Sokolova, E. E. Lysenkova
Innovations in Modern School: an End in Itself or an Aid for Working?
The article discusses one of the modern school’s problems, the distortion of innovative pedagogical technologies on their way to everyday teaching practice implementation. The article explores the causes and the consequences of such unjustified changes and proposes possible ways out. The process of distortion of the original innovation is shown by the example of educational technology workshops.
Keywords: innovative activity; educational technology; everyday teaching practice; dissemination of the gained experience; educational technology workshop; the personality-activity approach to learning; the stages of workshop building; the basic concept.

T. I. Popova
Foreign Students’ Spoken Russian Assessment Criteria under Modular Training Organization (B2-C1 levels)
The article deals with the foreign students’ monologue speech evaluation during the modular education system’s implementation by the example of basic text types of B2-C1 levels and the methods of their meaningful and modal complication.
Keywords: evaluation criteria; spoken language; Russian as a foreign language; a modular system of training; levels B2, C1.

Kira A. Rogova: the Jubilee Portrait of Scholar and Teacher

70th Anniversary of Alexander A. Volkov

Science and Practical Session of “ROPRYAL to Russian World”

Praiseworthy Saying about Alexander Pushkin’s works in a Foreign Audience