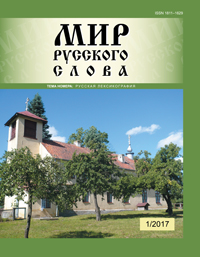 ROPRYAL Plan of Events for 2017

MAPRYAL Plan of Events for 2017

Oleg V. Nikitin
«Which Word is More Important,  Agitpunkt [“the Propaganda Station”] or Ierodiakon [“Hierodeacon”], Fotografija [“a Photo”] or Felon’ [“a Felon”]…» (the Chronicle Pages of the “Dictionary of the Russian Language” by S. I. Ozhegov)
The analytical review describes little-known events of 1940–1950s, related to the preparation and publication by S. I. Ozhegov of the first regulatory single-volume “Dictionary of the Russian Language”. The author introduces new archival materials, revealing some rare facts from this dictionary’s history. The paper presents and analyzes the editorial debate, research teams’ discussion of the manuscript, its feedback from the readers. The history of “The Dictionary”, published and commented in the paper, shows the complexity and inconsistency of the interpretation of individual words from ideological point of view, and describes the lexicographic “battles” often occurred because of it. The article is concluded by the publication of a symptomatic review of the “The Dictionary”, printed in the capital party newspaper “Culture and Life” on the eve of the famous “debate on the language”, and S. I. Ozhegov’s answer, motivating his attitude towards the problem.
Keywords: language personality; dictionary; lexicology; lexicography; science and ideology; history of linguistics.

Evgenia V. Andryushchenko
Expression of Impossibility and Prohibition in Russian Word Constructions with “nel’zja” and “ne”: Revisiting the Verbal Aspect of Infinitive
The paper deals with the expression of modal meanings with a combination of perfective and imperfective infinitives plus the predicative adverb “nel’zja” and the negative particle “ne”. The author propounds interchangeability of the words “nel’zja” and “ne” in combination with an infinitive to express action impossibility or prohibition. The result of the study suggests that the replacement is possible only in the sentences with a non-verbalized and potentially generalized subject.
Keywords: verbal aspect; infinitive; modal meanings; prohibition; impossibility.

Pyotr E. Bukharkin
Rhetoric and History of Literary Language
The article is based on the material of Russian rhetorical treatises of the mid-18th century, and deals with the interaction of rhetorical theory, and the history of literary language of a new type in the period of its norms’ shaping. The author places special emphasis on poetical illustrations in rhetorical treatises, which give an interesting material for reconstruction of that epoch’s linguistic consciousness.
Keywords: history of Russian literary language; rhetoric; rhetorical treatise; illustrative examples; linguistic consciousness; Mikhail Lomonosov; Aleksandre Sumarokov; Antioch Kantemir; Vasiliy Tredjakovky.

Lidia Y. Malygina
The Problem of Desacralization of Contemporary Linguistic Consciousness (as Exemplified in Promotional Discourse in TV Programs)
The article addresses the example of promotional discourse on TV in order to study the problem of desacralization of contemporary linguistic consciousness of Russian cultural linguistics community. The author describes the concepts pertaining the sacred status, illustrates the use of precedent phenomena of Biblical origin in promo videos language; analyses the reasons of communicative failures; describes the consequences of ethnolinguistic norms breaking. The author comes to the conclusion that the use of transformed quotes from the Scriptures by the journalists, their ironic play with events and names taken from the Holy Tradition, names of sacraments, rites, and objects of worship in a language game for comic effect is detrimental for speaker’s communicative endeavors, since it makes the promo text less pragmatic. Impertinent travesty of death images, intense exploitation of obscene precedent phenomena is perceived by the addressee as a blasphemy. As a result, a promo video as a part of televised promo discourse does not accomplish its dual implicit intention of informing and advertising the TV audience in order to draw and keep their attention, thus missing its stylistic point.
Keywords: TV promo discourse genres; TV announcement; promo text; desacralization of linguistic consciousness.

Natalia I. Pavlova
Tonya’s Goodbye Letter in the Composition of “Doctor Zhivago” Novel by Boris Pasternak
The author analyzes the content and structure of the goodbye letter written by Antonina Aleksandrovna to Yuri Zhivago, its characteristic language features, helping to understand the possible reasons of her saying goodbye to her husband, the correlation of letter’s composition parts to the events and characters of the novel.
Keywords: Boris Pasternak; composition and language characteristics of a letter; literary context.

Ekaterina N. Vinogradova, Liubov P. Klobukova
Some Linguodidactic Problems of Prepositional Description on A1 Level (Common Language) of Russian as a Foreign Language
The article focuses on some linguistic and methodical problems regarding selection of lexico-semantic variants of the prepositions, included in A1 level (common language) teaching content, as well as on some matters referring to presentation of prepositions in the main standard methodical documents of that level.
Keywords: Russian as a foreign language tests; level A1; common language; basic dictionary; state standard; preposition.

Raisa K. Bozhenkova, Natalya A. Bozhenkova
The Use of Modern Linguistic Research within Russian as a Foreign Language Program
The article characterizes the content of competence and educational paradigm of the process of training a qualified foreign specialist in the course of Russian as a foreign language. In this regard the article describes the study course elaborated for students of non-philological universities, built on the basis of modern integrative research in the humanities and aimed at making a creative multicultural personality of the student in the process of his professional training.
Keywords: integrative strategy; professional, communicative and linguocultural competence; a system of concepts; personal linguocultural sense; structural universality of the complex; effective vocational and intercultural interaction.

N. A.Vostriakova —
A Text as a Source of Optimism at the Starting Stage of Russian as a Foreign Language Learning

21st Russian Language Seminar in the Capital of Austria

Conference of Russianists on Kazakh land

Joanna Orzechowska, Helena Pociechina
Old Believers from Mazury: the History and Modern Research
The article presents the history and modern life of Polish (Mazurian) Old Believers, the descendants of people resettled to East Prussia in 1830, who had found themselves in 1945 within the Polish borders. The Old Believers’ culture has been described by German scholars, but now the most active research in the field of cultural heritage, primarily in its written form, is conducted by the scholars from the University of Warmia and Mazury in Olsztyn.
Keywords: Old Believers in Poland; the written form; cultural heritage.