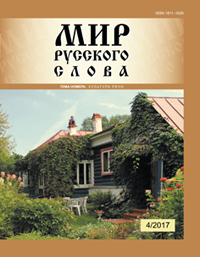 ROPRYAL in the Year 2017: Methodological Tools, Area Studies, and the Congress in Bashkiria

Galina N. Skliarevskaya
Metaphor and Сcomparison: Logical, Semantic and Structural Differences
The author argues that the ratio of metaphor and comparison is an important question for understanding the essence and mechanisms of metaphor formation, and thus for explaining many profound linguistic processes. The view of the metaphor as a reduced (collapsed) comparison was unquestionably preserved since the time of Aristotle, and only in the last 50–70 years has been shaken by new discoveries in semasiology. The article proves that metaphor and comparison are not a modification of one semantic phenomenon and not a stage of a single semantic process, but essentially independent linguistic phenomena that reveal differences in logical, semantic and structural aspects.
Keywords: metaphor; comparison; reference; semasiology; semantic model; lexicography.

Zhou Haiyan
On the Structure of the Construction of Russian Infinitive + Word Ending in ‘-о’ in the Aspect of Babaytseva Transition Theory
The article discusses the construction “infinitive + the word ending in ‘-o’”, trying to determine the place of such words in the parts of speech system. The sentences with this construction are regarded as two-part and/or one-piece, personal and impersonal, which is determined by the phenomenon of transition in Russian language system.
Keywords: infinitive; category of state; functional homonyms; transient phenomena.

Igor N. Apukhtin
Media Text Beyond the Borders
Th e article is dedicated to the changes of traditional journalistic language with the emergence of such phenomena of journalism / pseudojournalism as “blogs”, with their “normative” use of colloquialisms and jargon. The author also discusses the processes of rapid development in the scientific and technical spheres, and their influence on modern Russian language with its lack of necessary lexical units for designating new concepts and phenomena.
Keywords: media texts; traditional journalistic language; blogs; colloquialisms.

Aleksandr V. Savchenko, Mikhail S. Khmelevski
“Hey, You Misters or Whatever”: Forms of Address in Russian in Comparison with Slavic Languages
The authors explore some theoretical and methodical problems of understanding and usage of address forms in colloquial speech, and argue that modern Russian language situation indicates a certain “lacunarity” of these forms in comparison with other Slavic languages, or demonstrates the use of wide-spread conversation clichés in everyday communication, formal and especially informal. The paper analyzes modern Russian language etiquette of address forms in comparison with other Slavic languages, particularly Serbian.
Keywords: address forms; Slavic languages; stylistics; teaching method; Russian as a foreign language.

Li Yan
The Frame Structure of Nomination of the Chinese State Initiative “One Belt, One Road” in the Russian Mass Media Texts
The article analyses the linguistic means of verbalization of the frame structure of nomination of “One Belt, One Road” Chinese State Initiative in Russian newspaper discourse, demonstrating its  multi-component structure, where the frames represent tactics of the strategy implementation, and the slot units concretize the implementation of tactics.
Keywords: “One Belt One Road”; frame; slot.

Natalia Yu. Borisenko
Dictionary of Figurative Comparisons as Linguocultural and Lexicographic Draft for Future Teachers of Russian as a Foreign Language
The article presents the model of formation of linguocultural and lexicographic skills of foreign undergraduates studying the theory and methodology of Russian language teaching, and shows the possibilities of their training in the areas of selection, commenting and lexicographic description of ethnoculturally marked linguistic units on material of a literary text.
Keywords: Russian as a foreign language; lexicography; linguoculturology; figurative comparisons.

Mikhail V. Otradin
The Act of “Self-Knowledge and Self-Examination”: on the Internal Plot of “Frigate ‘Pallada’” by Ivan Goncharov
The author proves that in his book “Frigate ‘Pallada’” Goncharov has realized the hidden opportunities of the “literary travelogue”  genre, which seemed quite familiar to the 19th century readers. In particular, the writer was creatively using the symbolic meaning of the “path” motive. While refusing to follow the “story line”, Goncharov has acquired, so to speak, the right to aesthetical detachment, and has implemented the inner plot of the book, i.e. his thoughts and reflections about the travelogue he was creating; this second plot has not been fully understood yet.
Keywords: travelogue; symbol; plot; genre; humor.

Natalia I. Pavlova
The Place of Two Lara’s Notes in the Composition of the novel “Doctor Zhivago” by Boris Pasternak
The article deals with the stylistic and compositional features of two notes written by Lara, characteristic for her image creation in the novel, reflecting her inner world, and expressing the author’s position. They exist in the narrative-composition unity with many characters and events of “Doctor Zhivago”, and their interpretation can help to comprehend the integrity of the heroine’s character.
Keywords: Pasternak; “Doctor Zhivago”; composition; notes by Lara.

Aleksandr O. Bolshev
Melodramatic Resentment and Tragic Guilt
Melodramatism and tragiсalness are viewed in the article as two main worldview-psychological registers, in accordance to which people model and format their discourses. Melodramatic component plays a key role in most Russian classic works of literature, co-existing and interacting with the tragic one. The algorithm of the Russian novel is generally based on switching the narration from melodramatic to tragic mode.
Keywords: melodramatism; tragiсalness; the philosophy of resentment; the philosophy of guilt; melodramatic catharsis.

Cheslav A. Gorbachevskij
“We’ve had Enough of the Fuss with the Rehabilitated People”, or Out of the Hard Labor Camp into the Big Life
The article analyzes Elena M. Tager’s poem “Twenty Years After” (1959), which was a response to the statement of “tinkering with rehabilitated people” by famous novelist and playwright Vera F. Panova. The conflict of the two worldviews was associated with contradiction between personal experiences and different understandings of what had happened with the country in the Stalinist period. Elena M. Tager refers to the fate of her contemporaries suffered from the repressive state machine, such as writers Boris Pilnyak, Osip Mandelstam, and Boris Pasternak).
Keywords: conflict; thematic field; lyrical hero; author’s position.

Ekaterina N. Vinogradova, Liubov P. Klobukova
Some Linguodidactic Problems of Prepositional Description on A2 Level (Common Language) of Russian as a Foreign Language
The article elicits bottlenecks arising while selecting lexico-semantic variants of the prepositions to be included into A2 level (common language) teaching content alongside with some moot points of prepositional presentation in the key standard methodical documents of this level. The authors also raise the questions referring to continuity of level descriptions and to accurate categorizing of adverbial prepositions.
Keywords: preposition; Russian as a foreign language tests; level A2; common language; basic dictionary; state standard; linguodidactic program.

The Muse of Russian Lexicography

Alive Like Life Itself. The Anniversary of Professor Alexandre T. Khrolenko

Russian Word for the Whole World

The Linguistic View through the Prism of 100th Anniversary of Russian Revolution (1917–2017): on All-Russia Scholarly Conference “Word. Dictionary. Literature. The Language of Revolution and Soviet Epoch”

Irina M. Voznesenskaja
The lyrical Tone as a Stylistic Feature of the Late Short Stories by Konstantin Paustovsky
The paper deals with the problem of Konstantin Paustovsky’s individual style, and highlights the lyrical tone as its dominant feature. The author discusses the lyrical tone as a text category, defines its characteristics, identifies the means of its formation. The analysis is performed on material of the short stories “The Snow”, “A Rainy Dawn” “The Cordon 273”, “Summer in Voronezh”, and other works by the writer.
Keywords: the literary text; author’s style; tone of speech; subtext; Konstantin Paustovsky.