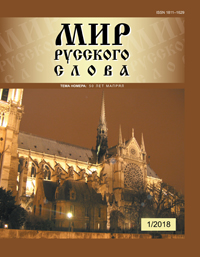 ROPRYAL Plan of Events for 2018

MAPRYAL Plan of Events for 2018

Elena I. Litnevskaya
On Written Russian Language’s Linguistic Standard and the Problems of Its Codification in the Beginning of the 21st Century
The author argues that standardization and codification of literary language as the core of national Russian language are generally recognized in Russian studies, but the notion of the standard and the definition of the means of its codification are treated ambiguously, in both broader and narrower senses. The paper discusses these approaches to the notion of standard and to its codification, accepting the broader understanding of codification means and by formulating the thesis, that the codification means of written speech in the beginning of the 21st century is subject to change due to the development of electronically mediated communication. The article deals both with the fundamental issues of linguistics and with its applied (methodical) aspects.
Keywords: codified standard and common language usage; means of codification; electronically mediated communication; meta-language reflection.

Liang Hongqi, Yan Kai
The Concept of ‘Memory’ in Ivan Bunin’s Works in the Mirror of Chinese Language
The authors analyze the concept ‘memory’ in Ivan Bunin’s prose on the background of the Chinese language, and offer classification of ‘memories’ according to the thematic features. Bunin’s unique connotations of ‘memory’ are clarified  by comparison with dictionary definitions of this lexeme.
Keywords: concept; memory; fiction.

Raisa K. Bozhenkova, Natalya A. Bozhenkova
Mechanisms of Birth and Accumulation of New Linguistic and Cultural Meanings in the Process of Text Translation
The article considers the mechanisms of semantic transformation of various text units’ meaning in the process of historical functioning. Being a part of linguistic and social universe, text field objectifies the results of subject’s previous speech activity, which have regulative and assessing value, defines the importance of the text in the system of other cultural phenomena in the society and thus produces a new sense unit using the same components.
Keywords: linguistic and cultural meaning; intra- and intertextual connections; axiological dominants; linguistic and sociocultural field.

Natalia V. Tshuikina
Unoriginal Russian Speech of a Literary Text Character: a Case Study of the “Seven Moons of Brigitta the Blessed“ Novel by Alexander Chernyavsky-Chernigovsky
The article analyses functions of unoriginal Russian speech (the speech of a foreigner) in a literary text. The analysis of constructions, which are non-standard from a native Russian speaker’s point of view, gives grounds for describing an image of a foreigner’s speech, which does exist in the mind of an ordinary Russian native speaker and is reflected in the linguistic behavior of the fictional character. The methods of studies of the ‘heritage language’ phenomena and of studies of Russian as a foreign language, as well as of the studies of a lingua franca communication have been applied for the analysis the character’s linguistic behavior. As a result, the author demonstrates specific linguistic strategies, becoming the means of the hero’s characterization. Reader’s perception of the character’s image is projected onto the whole meaning of the work of fiction.
Keywords: varieties of language existence; unoriginal Russian; heritage language; foreign language speaker; lingua franca; literary text.

Daria D. Vaseva
First-person Narration in Modern Fiction
The article explores the peculiarities of the first-person narration in modern fiction, where the communicative structure of the text is the base of language means’ formation. The author-narrator’s speech, being oriented to everyday communication features, becomes a key point for modern human being understanding.
Keywords: modern fiction; first-person narration; author-narrator speech; everyday communication.

Nina L. Fedotova, Anastasiya V. Vasilieva
Symbolic and Non-Symbolic Interaction of Educational Process Subjects under Conditions of Russian as a Foreign Language (B1) Short-term Learning
The article is devoted to the problem of organizing symbolic and non-symbolic interaction of foreign students in the  process of studying Russian at short-time courses. The textbook “What if…?”, developed by the authors, offers training exercises, allowing the interlocutors to develop direct reactions to each other’s speeches, and to exchange information in various forms.
Keywords: interaction; “What if…?”  textbook; interactive exercises; Russian as a foreign language; short-term courses.

The Problems of Linguoecology: Culture of Thought and Culture of Speech Communication

The Round Table “Nationally Oriented Textbook on Russian Language: from Idea to Implementation”