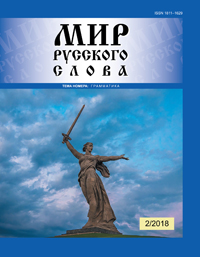 DOI: 10.24411/1811-1629-2018-12005
Kira A. Rogova
Towards the New Russian Academic Grammar
The article deals with the question of expanding the boundaries of grammar in order to include into it discourse analysis, which, in turn, is impossible without expanding the semantic base of the described language units and their semantic transformations in different types of discourses. The author states that the idea of developing “Russian Grammar of Meanings” was expressed by N. Yu. Shvedova immediately after the completion of the 1980 Russian Academic Grammar. The author provides information on modern approaches to this problem, associated with the representation of the general structure of the narrative (in its broad discursive sense), and the allocation of invariant structural components, characteristic for all possible narratives. Cases of proximity of values of separately taken syntactic constructions and their real belonging to different types of discourses are demonstrated in order to confirm the need of including into grammatical semantics not only the meanings of linguistic units, but also the general properties of their discursive functioning.
Keywords: discourse analysis; the structure of the narrative; the components of narrative; the importance of the linguistic units in the system and the types of semantic transformations in the discourse.

DOI: 10.24411/1811-1629-2018-12013
Ennoia Torre Montero
Specificity of Category of Animateness/Inanimateness in Modern Russian Language
The article deals with the problem of some nouns, the meanings  of which are difficult to classify as animate or inanimate by the choice of case forms. Observation of large linguistic material allows to identify 10 problematic groups of nouns and to discern the dominant trends in the classification of nouns included to one or another of these groups.
Keywords: category of animate / inanimate; masculine nouns and pronouns in the accusative case singular; plural nouns; group problem areas; semantics and linguistic tradition.

DOI: 10.24411/1811-1629-2018-12023
Olga A. Dmitrieva, Victor I. Shakhovskiy
“Letter of Happiness” as a Linguосultural Phenomenon
The article provides complex description of the “letter of happiness” genre from the perspective of communicative-semiotic structure and linguoecological potential. The authors derive and characterize substantial and non-substantial facients (components of a situation), defining system-forming features, and providing ratio of informative and emotive components in the text content. Ecological factor of the content of “letters of happiness” is also taken into account. Necessity of preventive educational work through teaching and art communication for the recovery of modern society is underlined.
Keywords: “letter of happiness”; emotivity; facient (component of a situation); linguoecology; destructiveness.

DOI: 10.24411/1811-1629-2018-12030
Igor V. Nefedov, Irina V. Makarova
Mytholexeme “Kikimora” and its Use as a Means of Verbal Aggression in Internet Discourse
The article deals with the mythological vocabulary used as a means of speech aggression. Dwelling on the example of mytholexeme “kikimora”, the authors pinpoint that the similar words are more likely to be used in Internet discourse as invective rather than nominative means. Moreover, the analysis of Internet discourse shows that the changes in the semantic structure of the “kikimora” lexeme is undergoing, and they are of great importance for the characteristics of the lexical system of modern Russian.
Keywords: mytholexeme “kikimora”; the nominative function; the function of invective; Internet discourse; verbal aggression; the mythological image; lexical meaning; semantic structure of the word.

DOI: 10.24411/1811-1629-2018-12036
Artur V. Chepkasov
Modelling of the Image of the Kuznetsk Basin According to the Media
The purpose of the article is to present a cognitive model of the image of the Kemerovo Region, based on the results of monitoring data analysis of regional, Russian and international media, including such information independent modules as economic, social, sports, cultural, historical, tourist, scientific, educational, political, and valeo-ecological subimages.
Keywords: media; region; image of the region; subimage; cognitive model of image.

DOI: 10.24411/1811-1629-2018-12041
Andrei D. Stepanov
The Concept of Topos: the Problem of Borders
The author poses the questions, allowing to distinguish the notion of topos from adjacent phenomena, and demonstrates its relation to the idea of speech genre.
Keywords: definition of topos; phenomenology; speech genre; rhetoric.

DOI: 10.24411/1811-1629-2018-12053
Svetlana N. Vorobyeva
The Theme of the Christ’s Atoning Self-Sacrifice in the Context of the Ideological and Philosophical Content of “The Word about Law and Grace” by Metropolitan Hilarion
The article explores the 11th century work of Russian literature, which can be regarded as a model of public speaking art. Special attention is paid to Metropolitan Hilarion’s ideas about the meaning of individual life as well as of the whole nation’s life. These ideas are associated with the Christian understanding of the meaning of Christ’s atoning self-sacrifice for the salvation of mankind from eternal death. The analysis is provided in the context of this text’s genetic relationships with Orthodoxy within its dogmatic and exegetical framework.
Keywords: religious and philosophical idea; Russian people; word; life; death.

DOI: 10.24411/1811-1629-2018-12058
Tatiana I. Radomskaia
“I Feel my Love Again towards the Daily Routines of Being…”: Order and Being in Pushkin’s Word Art
The author argues that the  fate of the national way of life of the pre-Petrine period in the post-Petrine space has found Pushkin’s special artistic interpretation. The article shows the proximity of Pushkin’s model of the world to the Ancient Russian type of consciousness. In his work, the poet captured the possible options for the development of the national way of life, and the two vectors of it in the Imperial space of the first third of the 19th century, which is associated with the artistic images of sanctity of the ordinary life and with their opposite dead forms of human life.
Keywords: national way of life; routine; sacredness; ritual; tradition.

DOI: 10.24411/1811-1629-2018-12063
Maxim L. Fyodorov
“The Prince and the Pauper”. Paradoxes of Demyan Bedny’s Life
The author, drawing on the material of Demyan Bedny’s archive, reveals some paradoxical details of the biography and work of the famous Soviet proletarian poet. A friend of Lenin, Bedny was close to the top of the Soviet government, being at the same time a close friend and interlocutor of Shalyapin, Tarkhanov, Moskvin, and other outstanding cultural figures. Enthusiastic words about his poetic talent were left by Pasternak, Mayakovsky, Pavel Vasilyev. The relations of “friendship enmity” connected Bedny with Meyerhold and Tairov. The poet’s relationships with Stalin also remain wrapped in mystery.
Keywords: Demyan Bedny; Soviet culture; Soviet theater; Stalin.

DOI: 10.24411/1811-1629-2018-12075
Irina V. Odintsova
Cognitive Lexicology and Cognitive Syntax in Linguodidactics
The article discusses the problems of lexicology and cognitive syntax in modern cognitive science. The need to integrate knowledge about the world, knowledge of the language, and knowledge of the specific speech situation is a prerequisite for learning verbal and semantic language code of a foreign language, mastering its conceptual picture of the world.
Keywords: cognitive lexicology; syntax; cognitive language education.

DOI: 10.24411/1811-1629-2018-12086
Olga V. Khorokhordina
The Basic Course as a Key Component of the Interactive Educational Complex in Russian as a Foreign Language
The article presents the mass open on-line courses in Russian as a foreign language for the levels B1, B2, C1, included as the basic component in the interactive learning complex. These МООСs are innovative, they have implemented the latest achievements of modern linguistics, linguodidactics and methods of teaching foreign languages.
Keywords: massive open on-line courses; Russian as a foreign language; basic course; linguistic and didactic features.

DOI: 10.24411/1811-1629-2018-12093
Ekaterina A. Vlasova, Olga S. Eremina, Olga A. Kultepina
An Experience of Creating the Massive Open Online Course of Russian as a Foreign Language (level A1)
The article discusses the approaches to language MOOCs creation, and analyzes the linguistic tradition of such courses in connection with a particular course. The main message comes from the concepts of digital learning: digital format should encourage students to leave the passive recipient position, and to become involved independent learners.
Keywords: digital learning; language courses; MOOC; active learning.

DOI: 10.24411/1811-1629-2018-12099
Lyudmila A. Araeva, Irina A. Krym, Maria N. Obraztsova
Revisiting the Linguistic Methods of Mass Open Online Courses in the Russian Language for Indigenous Small Peoples of the Russian Federation
The article is devoted to the consideration of linguistic methods of developing mass open online courses of Russian language for indigenous small peoples of Russia within the framework of the Federal Targeted Program “Russian Language”. The courses are aiming at popularizing the Russian language, increasing the efficiency and accessibility of its study, and improving the quality of education in Russian on the Internet.
Keywords: linguistic bases; electronic educational resources; indigenous small people.

DOI: 10.24411/1811-1629-2018-12104
Dina G. Shakurova
Elementary Situations of Everyday Communication and their Language Support (B1 level)
The article deals with lexical representation of common situations for everyday communication. A corpus of learner dialogues as well as “Russian Learner Corpus” became the basis for such lexical component analysis. The issue addressed in the paper is to what extent the lexis of common situations corresponds to the existing standards for Russian as a Foreign Language at B1 level.
Keywords: learner dialogues; lexical representation; everyday communication; construction.

International Conference of Russianists at the University of Barcelona

The International Contest of Open Courses in the Russian Language

DOI: 10.24411/1811-1629-2018-12113
Natalia A. Vostriakova
Texts about the Great Patriotic War in the Practice of Teaching Russian as a Foreign Language
The article focuses attention on the linguistic and cultural potential of educational (inauthentic) and authentic texts about the Great Patriotic War, and the ambiguity of their perception by foreign students studying Russian in Russia. The author offers possible methods and forms of working with such texts, and highlights the need to take into account the peculiarities of the personal and nation-specific attitude of students to the texts on this subject in the practice of RFL teaching.
Keywords: authentic text; educational text (inauthentic text); Great Patriotic War; Russian as a foreign language; foreign students.