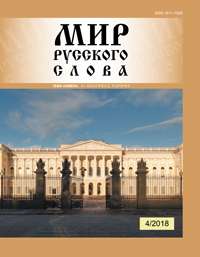 DOI: 10.24411/1811-1629-2018-14011
Evgeny I. Ivnitskii
The Formation of the Semantic Aspect of the Qualificational Category of Evaluation in Russian Language
The article addresses the issues related to the formation of estimates, as qualificatives modus category. The estimated value is regarded as the field, where the estimated predicate occupies the nuclear area, and the sentences with unbiased predicate are shifted to the periphery, but the estimate formed in them is created taking into account the basis of communicative segmentation, or by the other verbal means.
Keywords: classification; evaluation; qualifications; modality; subject; predicate; mode of communication.

DOI: 10.24411/1811-1629-2018-14017
Svetlana S. Vaulina, Larisa V. Kokovina
Russian Particles as Explicators of Subjective Modality Meanings in “The Overcoat” by N. V. Gogol, and Their Correlations in the English Translation of this Tale
The article, based on the material of Nikolai Gogol’s “The Overcoat”, explores Russian particles from the perspective of their role in the realization of subjective modality meanings. The article focuses on some ways of conveying these meanings in the English translation of the tale. High model potential of Russian particles is revealed by the means of functional-semantic analysis. The article also examines different variants used by translators to transfer the meanings of Russian particles. In most cases these meanings in the English text are expressed by other parts of speech, which is connected with the peculiarities of the structural-semantic system of the English language.
Keywords: subjective modality; particles; correspondence; equivalent.

DOI: 10.24411/1811-1629-2018-14022
Chen Lei
Polyregisterity of the Guidebook: on the Example of Travel Guidebooks on China for Russian Tourists
The article examines the syntactic (register-based) composition of a guidebook text, and demonstrates the usage patterns and combinations in this genre of communicative registers: three monological (reproductive, informative, generative) and one dialogic (volitive, in the absence of the reactive). The guidebooks to China for Russian tourists are used as examples, but the polyregisterity of the text and the basic principles of syntactic composition revealed, are common for the genre of a guidebook as a whole. They are determined by the communicative features of the text, especially the ones of the communicative framework, i.e. the relationships of the sender and the addressee; by the intention of the author and by the specifics of the denotatum (described object).
Keywords: communicative and functional grammar; text analysis; guidebook; communicative register; syntactic composition.

DOI: 10.24411/1811-1629-2018-14029
Chen Peijun
Neologisms Invented by Nikita Ya. Bichurin: on the Material of His Book “China, its People, Customs, Folkways, Education”
The article explores neologisms invented by N. Ya. Bichurin during the preparation of his monograph “China: Its People, Customs, Folkways, and Education” (1840), with special attention to the words derived from Church Slavonic models. The common ways of word formation are prefixal, suffixal, stem-composition.
Keywords: neologisms; Nikita Ya. Bichurin; сreative language use.

DOI: 10.24411/1811-1629-2018-14033
Natalya G. Babenko, Zoya L. Novozhenova
Russian Internet (RuNet) as a Space of Monitoring and Discourse Analysis of Fashionable Words
The authors argue that relevance of the study of so-called fashionable words (buzzwords) is due to their semantic plasticity, breadth of axiological range, variety of pragmatic characteristics, the need for prognostic and typological research of these words. The article reveals the discursive characteristics of fashionable words in the course of functional-semantic analysis of various types’ reflexives. The study, conducted mainly on network materials, shows the possibilities of RuNet as a space for monitoring and discourse analysis of fashionable words.
Keywords: fashionable word; semantics; pragmatics; reflexive; discourse analysis.

DOI: 10.24411/1811-1629-2018-14038
Irina E. Gerasimenko, Natalya N. Goncharova
“Reboot”, “Overload” and “Russian hackers”: Vocabulary of Information Technologies in Political Discourse
The authors explore the process of penetration of information technology sphere terms to the political discourse in the context of global and universal informatization of society, affecting both language and language consciousness, and demonstrate the regularities and mechanisms of their functioning due to the peculiarities of changes in the semantic structure of lexical units.
Keywords: sublanguage of information technologies; terms; political discourse; Russian hackers.

DOI: 10.24411/1811-1629-2018-14045
Nguyen Thi Thu
Typical Tricks as Correct / Incorrect Arguments Used in Disputes
The article is devoted to the comprehensive study of techniques, strategies, and tricks, which should be followed by the participants of any dispute or polemic dialogue. The author focuses on the features of permissive and impermissible tricks, and analyzes typical applications of these logical and psychological techniques in the process of dispute resolution and intentional manipulation of the interlocutor on the material of TV talk shows. On the basis of this research the author proposes to allocate correct methods of conducting argument in order to win, not only by discrediting the opponent, but also by convincing the audience by using all professional rules of dispute management.
Keywords: dispute; trick; argument; reason; talk show; opponent.

DOI: 10.24411/1811-1629-2018-14064
Uong Minh Tuan
Perceptual Image of the Concept Vietnam in Russian Linguistic Mentality
The article presents the results of a psycholinguistic experiment conducted with native Russian speakers with the intention to describe the sensual image of the concept Vietnam. As a result of the quantitative processing of the obtained reactions, it was revealed that the core of the image is based on the idea of Vietnam as a mysterious, unfamiliar and exotic country. In the perceptual image of Vietnam the leading features are those that characterize the country’s territory, its location, climatic conditions, culture and society.
Keywords: concept; Vietnam; perceptual image; associative experiment; linguistic mentality.

DOI: 10.24411/1811-1629-2018-14070
Irina E. Vasileva
Topos in Modern (Post-Rhetorical) Culture: a Problem Statement
The article discusses some problems of the transformation of classical topos model in the period of Modern (Post-Rhetorical) Russian culture. The author analyzes structural peculiarities and heuristic potential of topoi, and, as a result, proposes a conception of subject-oriented topos model, which is relevant for the Russian Post-Rhetorical culture.
Keywords: topos; modernity; subjectivity; Konstantin Batyushkov.

DOI: 10.24411/1811-1629-2018-14088
Olga S. Laletina, Fu Tianqi
Matters of Methodology to Study Works by Russian Post-Revolutionary Immigrants to the East: Lyrics by Larissa Andersen and Intercultural Communication
The article poses a question of the perspectives of systematic analysis for studying the forms of foreign cultures’ reception by Russian émigré writers. By exploring the autobiographical myth of Larissa N. Andersen (1911–2012), the authors demonstrate, that the key role in its formation was played by the actualization of the connections between Andersen’s poetry and the cultural traditions of Russia, East and West.
Keywords: history of Russian poetry; Russian émigré poetry; poetics; methodology of literary studies.

DOI: 10.24411/1811-1629-2018-14093
Ekaterina N. Vinogradova, Liubov P. Klobukova
Some Linguodidactic Problems of Prepositional Description on B1 Level (Common Language) of Russian as a Foreign Language. Article 1. The Requirements
The article elicits bottlenecks arising while selecting lexico-semantic variants of the prepositions to be included into B1 level (common language) teaching content alongside with some moot points of prepositional presentation in such an important standard methodical document of this level, as the Requirements.
Keywords: preposition; lexico-semantic variant; Russian as a foreign language tests (level B1); common language; Requirements.

DOI: 10.24411/1811-1629-2018-14100
Nina A. Kostiuk
Teaching Russian Verb Grammar to Foreign Students of А1–А2 Level Using Literary Text
The article deals with the system of work and modernization of traditional types of lexical and grammatical exercises in the process of teaching Russian verb grammar on the basis of artistic (educational-authentic) text in a foreign audience at the A1–A2 level.
Keywords: literary text; authentic text; Russian verb grammar; speech and non-speech exercises; modernizing lexicogrammatical exercises.

DOI: 10.24411/1811-1629-2018-14107
Julia B. Zhidkova
Elaboration of Listening Materials for Perception and Understanding of Textual Information
The article presents tasks of listening that provide the process of perception, understanding and subsequent processing of text information transmitted orally or in writing. The author proves the possibility of using such tasks not only in the classroom in Russian as a foreign language, but also in the classroom in special disciplines.
Keywords: text; listening; tasks of listening.

The Jubilee of the “Children Translators” Project in Spain

DOI: 10.24411/1811-1629-2018-14115
Alla M. Berezhnaya
Art Museum in Modern Communicative Landscape: Values and Practices
The author argues that the number of exhibition projects in Russian museums is increasing with each passing year. Their coverage in media and the quest for mutual understanding between art critics and journalists are currently widely discussed in the museum community. The article is based on the personal experience of the author being the Head of the Press Department of the State Russian Museum in St. Petersburg. The analysis of the collected material allows her to fix some new trends, relating to the productive dialogue of the media community and the art museum.
Keywords: art museum; participatory culture; aesthetic values; press release; media; narrative.