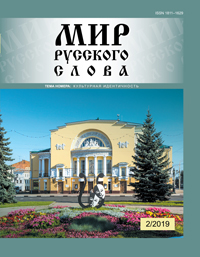 DOI: 10.24411/1811-1629-2019-12005
Oksana M. Akay
The State Category Words and the Language Lacunae Elimination
The author explores the words belonging to the controversial part of speech, the category of state, as interlingual and intralingual lacunae. The former can be established in relation to those languages where there is no corresponding part of speech; the latter includes non-conventional formations that expand the composition and discursive capabilities of a given part of speech within a single language.
Keywords: parts of speech; category of state words; grammar lacunae; interlingual and intralingual lacunae.

DOI: 10.24411/1811-1629-2019-12019
Anastasiia D. Baranchikova, Alevtina N. Speranskaia
Dynamics of Verbal Compatibility of the Lexeme oath on the Material of the Russian National Corpus
The article investigates the frequency of combinations of the lexeme oath with verbs, and the dynamics of these word usage changes on the material of the Russian National Corpus of the 18th and 19th centuries. The predicates, which name the most frequent pragmatic actions in the description of the communicative situation connected with the oath, are revealed.
Keywords: oath; speech genre; lexical compatibility; diachrony.

DOI: 10.24411/1811-1629-2019-12032
Tatyana L. Kaminskaya
Communicative Trends of Russian Ecological PR
The author explores PR communication strategies used by environmental organizations in Russia through content analysis and discourse analysis of various online platforms. Such a study is relevant due to the increasing role of environmental discourse in modern politics and with the involvement of an increasing number of people in this discourse.
Keywords: ecology; communication; politics; storytelling; gamification; media selection.

DOI: 10.24411/1811-1629-2019-12037
Oksana S. Bakanova
Peculiarities of Expression of a Positive Evaluation in Scientific Text: on the Basis of Reviews of Official Opponents of the Thesis
The article presents the results of the evaluation study, in particular, the typical ways of expressing a positive assessment in the reviews of official opponents of the thesis for a degree. The article describes the language means of enhancing and mitigating a positive assessment that help the subject to maintain ethical and psychological balance in scientific communication.
Keywords: subject; object; evaluation; scientific text; review.

DOI: 10.24411/1811-1629-2019-12042
Maria A. Vasilchenko
The Terms “Genre”, “Register” and “Style” in Russian and English Language Discourse
The purpose of the article is to review, analyze and compare definitions of the key categories of “genre”, “register” and “style” presented in the Russian and English-speaking linguistic discourse. The classical works of Russian linguists (M. M. Bakhtin, M. N. Kozhina, V. V. Vinogradov, etc.), as well as the program works of Anglo-Saxon scholars (C. Miller, D. Crystal and other). The results of the study showed that the intersections between the two traditions exist only in relation to the concept of “genre”, while the interpretation of the terms “register” and “style” are fundamentally different. The data obtained can be useful for both Russian and English-speaking linguists. In addition, the conclusions of the work suggest the need for discussion and coordination of the terminological apparatus, which would undoubtedly contribute to the development of dialogue between the representatives of these schools.
Keywords: genre; register; style; linguistics; stylistics.

DOI: 10.24411/1811-1629-2019-12049
Tatiana V. Anisimova, Svetlana A. Chubay
Features of Intertextuality in Russian Social Advertising
The article provides a classification of the types of intertextuality characteristic for social advertising discourse. At the first stage, intericonicity and intertextuality are distinguished. The latter, in turn, is divided into a direct one, in which the borrowed text has the form of literal reproduction of the speech of another person, and indirect one, where the borrowed text is reported in the retelling.
Keywords: social advertising; intertextuality; intericonicity.

DOI: 10.24411/1811-1629-2019-12060
Natalya A. Redko
‘Conscience’ as a Key Dominant of the Russian National Picture of the World
The author argues that ‘conscience’ refers to the basic concepts of Russian spiritual culture. Many Russian linguists in their writings turned to the analysis of the semantics of the word sovest’ (conscience) and its derivatives. The article presents an analysis of the image of ‘conscience’ in traditional folk culture, based on the material of the Archangelsk region. A literal reading of the metaphorical verb combination of the word sovest’ reveals some “images” (gestalts), the nature of which shows the peculiarity of the studied fragment of the dialectal picture of the world and the presence of a common and variable part of the national ideas about ‘conscience’.
Keywords: language picture of the world; concept ‘conscience’; dialects of the Arkhangelsk region.

DOI: 10.24411/1811-1629-2019-12066
Fedor N. Dviniatin
Formula or Topos?
The author gives examples, allowing to distinguish the phenomena of “formula” and “topos” in Russian prose of the post-rhetorical period (common places in the description of the characters’ appearance).
Keywords: topos; formula; 19th century Russian prose.

DOI: 10.24411/1811-1629-2019-12071
Svetlana N. Vorobyeva
Apocrypha in the Context of the Religious-Moral Education of the Ancient Russian Person
The author turns to apocryphal literature, which, unfortunately, is not in demand and is not well understood yet, and author focuses on the Apocrypha “The Walking of Zosima to the Rahmanas”, which is explored from the point of view of an instructive and practical aspect related to the formation of certain attitudes, spiritual and moral foundations on which the ancient Russian man had to build his life. The analysis is carried out in the context of a genetic connection with Orthodoxy in the framework of its dogmatic and exegetical ideas. Like many other works, this text has played a special role in the formation of dogmatic consciousness, in the transfer of theological knowledge and the establishment of doctrinal truths that influenced the process of formation of Christian conception about the life of believers.
Keywords: Apocrypha; righteous life; bliss; spiritual and moral; attitudes.

DOI: 10.24411/1811-1629-2019-12076
Guo Wei
Dialogue with Chinese Philosophy: “Tao Te Ching” in the Story “A Record about Chasing Wind” by Victor Pelevin
The article identifies the sources of the story “A Record about Chasing Wind”, reveals its figurative content and semantics, which arises in dialogue with Chinese philosophy. The purpose of the article is, first of all, a better understanding of Pelevin’s works saturated with foreign culture quotations and reminiscences, explaining the general meaning of his work in one of the most important contexts for this author.
Keywords: Pelevin; “Record about Chasing Wind”; Lao Tzu; “Tao Te Ching”.

DOI: 10.24411/1811-1629-2019-12081
Inna V. Semenova
“Russian Cultural Archetype”: the Conception of Author’s Special Course for Foreign Students
The article covers the issues of teaching foreign students and forming their intercultural communicative competence. A special training course is offered as a means of forming intercultural competence of foreign students. The course is based on videos of Russian fairy tales and legends and on Russian fixed expressions representing basic values and moral canons of Russian culture. The subject matter and methodological content of this course are focused on the development of cultural, language, and linguistic competencies of students. The author presents the structure of the course, educational material which is used in the classroom, the system of work with this material and some results of its testing. The course is recommended for foreign students and trainees with B1 and B2 language proficiency levels.
Keywords: language education; intercultural communicative competence; Russian cultural archetype; paroemia; idioms and cinematographic texts as educational units.

International Meeting of Russianists in Crimea

Russian Folklore is in the Public Domain. About the Eighth Online Friendship Festival at Lomonosov Moscow State University

DOI: 10.24411/1811-1629-2019-12105
Maxim L. Fyodorov
“The Turbin Brothers” and “How the 14th Division Was Going to Paradise…”: on a Possible Dialogue of Mikhail Bulgakov and Demyan Bedny
The author argues that for the first time, “The Turbin Brothers” by Mikhail Bulgakov and the forgotten play “How the 14th Division Was Going to Paradise…” by Demyan Bedny became the object of comparative analysis. Both playwrights were commissioned by the theaters to remake their early works (a novel in Bulgakov’s case, and the poetic novella in Demyan Bedny’s case) into plays. The article includes unknown archival materials from the Demyan Bedny Foundation in the Manuscript Department of the World Literature Research Institute in Moscow, and restores the history of the creation of both works, analyzes not only the common motives of both plays, but also their cross-cutting images, such as the Apostle Peter as the gatekeeper of paradise.
Keywords: Mikhail Bulgakov; Demyan Bedny; theater; “The Turbin Brothers”; “How the 14th Division Was Going to Paradise…”; Apostle Peter; archive.

DOI: 10.24411/1811-1629-2019-12110
Tatiana B. Avlova
Interview with the Actor as a Text in the Russian Language Classroom
The article presents a discursive analysis of the interviews with contemporary actors of theater and cinema. United in a discursive formation, these interviews allow to reveal their informative problematic and thematic focus, which is different in different age periods of the characters. These circumstances determine the selection of language means of expression, leaving the possibility of subjective variation in use. Both Russian information structure and language means of expression in methodical comprehension are considered as a base of manuals for the departments of creative arts in Russian as a foreign language and culture of speech for native speakers of Russian.
Keywords: discourse formation; discourse analysis; information structure of the text; subjectivization of the basic categories.