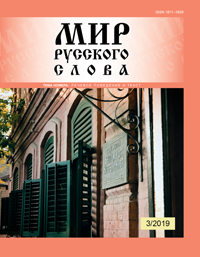 In Memoriam: Lyudmila A. Verbitskaya

DOI: 10.24411/1811-1629-2019-13008
Yulia V. Slozhenikina, Andrei V. Rastyagaev
About the Russian Word “Pyl” (“Ardor”) and Its Derivatives in Russian
The article is devoted to the evolution of the word-forming nest with the apex of “pyl” (“ardor”) in Russian. The main attention is paid to the lexemes “pyl”, “pylat’” (“to flare”), “pylkij” (“ardent”). The authors are tracing the stages of formation of both the derivative nest and the use of its components in the language of fiction. The article describes five stages of lexical and semantic evolution, each of which is connected with the names and works of writers and scholars: 1) archpriest Avvakum; 2) M. V. Lomonosov’s artistic and scientific works; 3) poetic concept of “wit” offered by A. P. Sumarokov’s; 4) main writers of the 18th century, such as D. I. Fonvizin, N. M. Karamzin and others, as well as N. I. Novikov and I. A. Krylov, in whose works there appeared connotative, ironic and sarcastic evaluations of “pyl”; 5) the formation of stable expressions “s pylu”, “v pylu”. The article reflects the lexicographical practice of fixing the word “pyl” and its derivatives in the dictionaries of the Russian language.
Keywords: etymology; semantics; figurative meaning; metaphor; epithet.

DOI: 10.24411/1811-1629-2019-13017
Larisa B. Vasilenkova
Foreign Language Insertions in the Text of Travelogue as a Means of a Foreign Country’s Image Creation
The article describes some Italian loanwords, their functioning and distribution in the polygenre structure of the travelogue. It presents the analysis of the book “Images of Italy” by Russian writer and art historian Pavel Muratov. The author of the article draws attention to the uses of borrowings and their relationship with the functional-semantic types of speech.
Keywords: travelogue; intercultural and inter-language contacts; loanword; function; functional-semantic types of speech.

DOI: 10.24411/1811-1629-2019-13025
Аnna Korolkov
Language Means of Emotional Influence in Modern Texts of Mass media: Coverage of Extreme Events
The article explores linguistic means of emotional impact in journalistic texts covering extreme events. For this purpose, the author has selected several texts in the genre of analytical comments, representing four extreme events, which had happened in 2018. Special attention is paid to the analysis of emoticons and subemotics, i.e. the components of text’s thematic structure, containing emotional speech signals used by the author to encode the emotional content and exert an emotional effect on the reader. Both emotionally colored language tools and concepts, which indicate emotional situations, are used as such signals. The article presents the results of a study aimed at identifying the differences between the emotives used in the genre of analytical commentary in the quality press and tabloids. It also presents their classification and defines their role in such a significant component of this genre as argumentation.
Keywords: textual emotion; emotheme; emosubtheme; emotives; mass media; speech acts of emotional impact.

DOI: 10.24411/1811-1629-2019-13032
Wang Xiaoxi
“Brilliant” or “Bril’ant”: Phonemic Variants in the History of Russian Spelling
The article traces the process of borrowing with double consonants and combinations of two vowels, during which spelling variation arises as a reflection of pronunciation options. As a result, the following pattern is established: the use of double consonants is accompanied by the preservation of the junction of two vowels (“brilliant”, “billiard”, “milliard”, “million”), while both features are lost at the same time (“bril’ant”, “bil’ard”, “mil’ard”, “mil’on”).
Keywords: history of spelling; development of borrowings; spelling and phonemic variants.

DOI: 10.24411/1811-1629-2019-13038
Karina N. Galai, Anna V. Zhuchkova
Albasty, Lobasta, Rusalka, Kikimora in Kazakh and Russian Folklore: Comparative Content Analysis
The article presents a comparative study of the images of albasty, rusalka, kikimora and lobasta in terms of their origin, visual characteristics, functional properties, symbolic meaning and role in Kazakh and Slavic folklore. The authors analyze the origin of these images, the classification of albastys (Kara Alabsty, Sary Albasty and Sasyk Alsbasty), the typological relationship of albastys, rusalkas and kikimoras, and reveal general generic properties of these folk characters and dynamics of their historical development and transformation. A comparative analysis of albastys and rusalkas leads the authors to a conclusion about their functional difference: albasty implements the archetype of the mother, rusalka is closer to woman’s archetype of anima. The image of “lobasta” in Slavic folklore is a secondary one, it was borrowed from the Turkic cultures.
Keywords: albasty; lobasta; memorates; rusalka, kikimora.

DOI: 10.24411/1811-1629-2019-13044
Dao Dinh Thao
Linguocutural Type of “Homo Scriptor” in A. S. Pushkin’s Aphorisms
The article is devoted to the identification of axiologically significant characteristics of the linguocultural type of “Homo Scriptor” in Alexander Pushkin’s aphorisms. The contrastive approach to the analysis of linguistic material makes it possible to speak of universal values reflected in the aphoristic judgments of the classic of Russian literature.
Keywords: aphorism; linguocultural type; Homo Scriptor; value; linguistic personality.

DOI: 10.24411/1811-1629-2019-13051
Oksana L. Abrosimova, Liliana V. Voronova
Linguocultural Potential of Russian Feature Films in the Practice of Teaching Russian as a Foreign Language
The article is devoted to the analysis of feature films that can be involved in viewing and discussion in the process of teaching Russian as a foreign language. The authors concentrate on the observation of linguistic and cultural potential of the films, able to bear information about socio-cultural situations, the nature of behavior, speech techniques, adequately used and understood by native speakers. Viewing purposefully selected feature films is one of the elements of an integrated approach to training, which results in the formation of a well-educated specialist in Philology with extensive background knowledge.
Keywords: selection of feature films; national identification of speech behavior; language techniques of actual communication.

DOI: 10.24411/1811-1629-2019-13056
Olga A. Dimitrieva
«In Russia We Have the Kindest Drunk People…»: On the Image of a Drunk Man in the F. M. Dostoevsky’s Works
The article deals with the components of the image of a “Bacchic man” on the example of F. M. Dostoevsky’s novels, with the focus on the image of human being’s appearance with its components, as well as on the description of psychophysiological features, the so-called external manifestations of the internal state of mind. The author discusses the connections between the hero’s state and his or her emotional background, as well as the indications of the character’s traits presented in the situation of wine drinking.
Keywords: F. M. Dostoevsky; language; semantics; author’s style; author’s individual worldview.

DOI: 10.24411/1811-1629-2019-13062
Yuri S. Voronov, Natalia V. Lyubeznova
Linguistic Analysis of Stalin’s Speech on July 3, 1941
The paper is devoted to Stalin’s oratory. Based on the socio-psychological, linguistic and rhetorical analysis of the content of his July 3, 1941 speech, the author attempts to get an idea of the significance of the content of this speech, its language and style, its logical organization, and the means of expressing the speaker’s will.
Keywords: style; appeal; will; necessity; images; emotional language.

DOI: 10.24411/1811-1629-2019-13071
Ma Ruye
Representation of Military Events in the Works of the Memoir Genre: Based on the Memoirs of K. K. Rokossovsky “Soldier’s Duty”
The author argues that memoirs, consisting of a variety of situations, allow one to select relatively complete thematic parts of the text for their holistic analysis. This goal determined the choice of the one of the chapters of Marshal Konstantin Rokossovsky’s memoirs, which consistently represents the course of the Great Patriotic War, in which he was a participant from the first to the last day. The chapter devoted to the battle of Kursk reveals typological features of the text about the military battle, including such compositional parts as a preliminary report about the battle, preparation for it, a description of the battle itself, and some of its results. Observation of information and language features of each part, development of the message during interaction between parts allows to draw conclusions about typological features of such text and about ways of its subjectification that became result of carrying out the discursive analysis with its technique directed on studying of the whole text.
Keywords: thematic parts of military memoirs as a text; a holistic analysis of the text as a realization of discursive practice; ways of reporting on the event; forms of subjectification of the narrative.

DOI: 10.24411/1811-1629-2019-13083
Marina Yu. Sidorova, Artem S. Shmatko
From “Minimized Word List” to “Lexico-Grammatical Base”: a New Approach Towards Representation of the Language of a Scientific Discipline
The authors are presenting the principles which can be used to develop a “lexico-grammatical base” for a subject area (scientific discipline), a new type of linguistic product designed both for teaching and research purposes. This approach reflects the tradition of Russian didactic lexicography (integrating lexical and grammatical information) as well as modern requirements for teaching Russian as a foreign language to students majoring in different fields. The article demonstrates how such a “lexico-grammatical base”, its word list and its grammatical “expansion” are organized in the “Lexico-Grammatical Base for General and Non-Organic Chemistry” developed by the authors (Lomonosov Moscow State University, 2019).
Keywords: Russian language; minimized word list; general and non-organic chemistry; machine text processing.

DOI: 10.24411/1811-1629-2019-13092
Natalia A. Malinkina, Tang Zhen, Zhu Yunping
Texts on Theatre in Internet Communication: Linguodidactic Potential in the Aspect of Teaching Russian as a Foreign Language
The authors conduct a linguistic analysis of a group of texts about the theater in the genres of Internet short stories, Internet feedbacks, Internet essays and on the basis of its results demonstrate their linguodidactic potential in teaching Russian as a foreign language (levels B1-B2) in the formation of language, socio-cultural and communicative competences of foreign speakers.
Keywords: text; speech genre; Internet communication; linguistic analysis; linguodidactic interpretation.

DOI: 10.24411/1811-1629-2019-13099
Roza A. Volkova, Elena N. Kulinich, Elena D. Makarenko, Nina M. Miluk
Linguo-Didactic Potential of Texts about the Scientist: Genre Variation: on the Example of Internet Texts  about D. I. Mendeleev
The authors explore the discursive features of speech genres contributing to a comprehensive study of the image of the scientist and the identification of his professional and moral qualities. The article demonstrates the genre variability of the texts devoted to Dmitry Mendeleev and their linguistic and methodological potential.
Keywords: text; genre; discourse; linguistic and didactic potential.

House-Museum of the Futurist Poet

DOI: 10.24411/1811-1629-2019-13112
Irina V. Zykova
The Russian Avant-Garde Idiomatics in Velimir Khlebnikov’s Language-Creativity: from Tradition to Experiment
The article aims to elaborate the theory and methodology of studying the Russian avant-garde idioms. The research is carried out on the material of Velimir Khlebnikov’s works. Special attention is paid to the analysis of modified “traditional”  idioms  that represent one of the types of verbal avant-garde idiomatics. The linguoexperimental (cognitive) strategies of phraseological transformations used by the author to create a new language (or “a language of the future”) in literature and art as well as to establish new linguistic-aesthetic canons in poetry are detected and described.
Keywords: avant-garde idioms; Cubo-Futurism; Khlebnikov; Russian phraseology; language experiment; modification of a phraseological unit.

“I was Playing my Flute, Fulfilling the Doom of the World…”