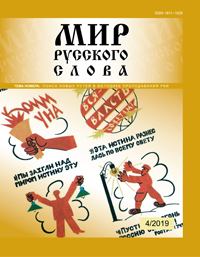 DOI: 10.24411/1811-1629-2019-14008
Vladimir N. Artamonov, Ekaterina V. Uba
Constructions with a Particle “razve” as a Means of Implementing the “Normal vs. Abnormal” Opposition at the Syntactic Level
The article is devoted to the study of the estimated normative opposition “normal vs. abnormal”. The authors analyze imaginary question constructions with a particle “razve”, which are considered to be rich expressive tools. The study is based on the language material from the “National Corps of the Russian Language”.
Keywords: normal; abnormal; rating; rating scale; imaginary question sentence.

DOI: 10.24411/1811-1629-2019-14014
Ksenia Hainová
The Formation of Film Terminology in the Russian Language in the Context of Cinema’s Historical Development
The author argues that Russian film studies texts of various genres are full of borrowed terms, mostly of English origin, like blockbuster, buddy movie, backstage, sequel, remake, arthouse, etc. Their use in modern Russian is carried out by means of transcription and transliteration, most often from English. In comparison with them, the main terms of cinema that have been fixed in the vocabulary of the Russian language are perceived as devoid of their foreign origin. Thus, such terms as “montazh” (editing), “rakurs” (foreshortening), “kinematograf” (cinematography), “ekran” (screen), “kamera” (camera), etc., also being words of foreign origin, in the course of cinema development have become a part of Russian language, which can be explained by the internationality of cinema, close international cooperation of cinematographers and journalists. The article addresses to the origins of cinema as a new form of attraction and follows the process of forming its terminology against the background of its general development, as well as a classification of source terms by their origin.
Keywords: film terminology; mastering of movie terms in the process of cinema’s development; modern replenishment of the stock of terms.

DOI: 10.24411/1811-1629-2019-14022
Liubov Iu. Stepanova
The Adjective “Stone” in Pavel Bazhov’s Tales
The article is devoted to the functioning of the adjective “stone” as a lexical-semantic unit in prose fiction, on the material of the tales by Pavel Bazhov. The author concludes that the adjective allows to create vivid images and pictures of the fantasy world, characterizes the moral qualities of a person in a metaphorical form.
Keywords: stone; lexical compatibility; semantics.

DOI: 10.24411/1811-1629-2019-14029
Irina S. Kulikova, Diana V. Salmina
Telling Metaphorically about a Metaphor
The article explores a metaphorical way of presenting the concept of “metaphor” in a thematically integral set of texts, the collection of essays “Theory of Metaphor” (Moscow: Progress, 1990). Using the methods of contextual and component analysis, the authors are revealing the role of cognitive metaphors in the formation of a multidimensional conceptual content of the term “metaphor”.
Keywords: metaphor; cognitive metaphor; expressive metaphor; terminologization of metaphor.

DOI: 10.24411/1811-1629-2019-14034
Natalia V. Belyaeva, Irina P. Mikhailova, Nadezhda P. Schulgina
The Regional Component in the Teaching of Russian as a Foreign Language: on the Works of Kursk Region Writers
The article analyses the possibilities of using the regional component in the practice of teaching Russian to foreign students, and substantiates the appeal to regional linguocultural material as a way to increase communicative and cognitive motivation in teaching Russian to foreign students and, more broadly, as a means of developing interest in Russian culture.
Keywords: the regional component; literary text; Russian as a foreign language; foreign students.

DOI: 10.24411/1811-1629-2019-14048
Iris Uccello
Judicial and Ideological Rhetoric: Criminal Law Process in Dostoevsky’s Interpretation
The article discusses the rhetorical strategies used by Dostoevsky in interpreting the lawsuits, and in particular, the Kronenberg case (1876), which had been reviewed by the writer in a number of articles in his “Writer’s Diary”. By using a microhistorical approach, the author shows the discursive and ideological causes of the distortion of reality in these texts.
Keywords: rhetoric; referentiality; ideology; Dostoevsky; judicial matter.

DOI: 10.24411/1811-1629-2019-14055
Cheslav A. Gorbachevskij
Chronos in Georgy Demidov’s Story “Simpleton” (“Fone Kvas”)
The author argues that in the story “Simpleton” (“Fone kvas”) by Georgy Demidov the description of time becomes a key component of poetics, allowing us to understand the specifics of the text events. The article analyzes the multidimensionality of time in the structure of the story. The temporal plan of the work demonstrates with varying degrees of intensity the interaction of several varieties of time: historical and authorial, subjective and biographical, calendar, eventual and cyclic time.
Keywords: time category; temporal plan; methods of time personalizing; spatial interpretation of time.

DOI: 10.24411/1811-1629-2019-14061
Igor V. Nefedov
Virtual Educational Environment in Russian as a Foreign Language Teaching: Reality and Prospects
The author argues, that in recent years multimedia technologies have become widespread in the practice of RFL teaching. The virtual environment has dramatically changed the educational process, intensified it and brought it to a new stage of development, providing an opportunity of online teaching. There have been significant changes in both classroom and outdoor work with foreign students. The virtual educational space provided a wide range of technical and functional opportunities for implementing various programs in Russian as a foreign language from A1 to C2 levels. The purpose of the article is to use the analysis of existing multimedia services of the virtual educational environment to determine the nearest prospects for its development.
Keywords: virtual educational environment; websites and web portals for teaching RFL; online maps; applications and programs for teaching RFL.

DOI: 10.24411/1811-1629-2019-14072
Valeriia V. Dubovik, Valentina А. Zakrevskaya, Mirko Sacchini
The Method of Included Observation during the Learning of Russian as a Foreign Language
The article describes how the method of included observation can be applied to the practice of teaching Russian as a foreign language and to the study of the functioning of language elements found beyond the Russian standard language. This method’s components allow to unify didactical strategies with elements of scientific research.
Keywords: teaching of Russian as a foreign language; method of included observation; fixed expressions of oral speech.

DOI: 10.24411/1811-1629-2019-14079
Natalia A. Vanyushina, Olga A. Dmitrieva
Dealing with Peculiarities of Foreign Students Sociocultural Adaptation in Russia, Germany and France
The article is devoted to the implementation of the Russian priority project “Export of Education” and considers the main issues of sociocultural adaptation of foreign students in universities of Russia, Germany and France in a comparative aspect. The main steps of this work of higher educational institutions and public organizations in these countries are described.
Keywords: Russian as a foreign language; adaptation; sociocultural adaptation; tutor.

DOI: 10.24411/1811-1629-2019-14085
Natalia A. Vostriakova
Actual Problems of the Initial Stage of Teaching Russian Language to Muslim Students from Distant Foreign Countries
The article discusses the factors affecting the attitude of foreign students from foreign Muslim countries to the study of the Russian language. The author highlights the importance of taking into account the religious mentality of these students in the process of teaching Russian in order to increase their educational motivation and optimize relations between Russians and Muslims.
Keywords: Russian as a foreign language (RFL); foreign Muslim students; universal textbook on RFL; textbook “The Road to Russia”; taking into account the confessional characteristics of students.

Marburg Educators in the Field of Russian Language and Russian Culture. To the Anniversary of Mrs. Barbara Karhoff

Anniversary of Ivan A. Baudouin de Courtenay at Kazan University