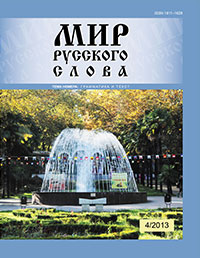 Alexandra А. Vorozhbitova
Linguistic and Rhetorical Discursive Processes of Literary Belletristic Communication: Algorithms and Prospects of Research Actions
The article contains generalization of the progress and results of research in line with the comprehensive study of discursive processes in the Russian socio-cultural and educational space on the base of linguistic and rhetorical (L&R) conсeptual platform (Research Project № 6.3660.2011, Ministry of Education and Science of the Russian Federation). Algorithms and perspectives projections for the study of discursive processes of literary belletristic communication are presented from the standpoint of the Sochi linguistic & rhetorical school.
Keywords: linguistic and rhetorical (L&R) paradigm, discursive processes, socio-cultural and educational space, of literary belletristic communication.

Maria A. Kozorezova
Independent Parts of Speech as Specifiers in the Structure of Prepositions
The article describes the matters related to Russian prepositions in the framework of functional communicative grammar, more specifically to the use of an additional component name specified in the structure of a preposition. This specific feature hasn’t been described yet. A specifier may be represented by various parts of speech, hold various positions in the structure of a preposition depending on its type and have various semantics. Specifiers show that a structure of a Russian preposition is more complex than understood before.
Keywords: preposition, specifier, coordinated attributive, adverb.

Irina P. Chernousova
The ‘Blessing’ Concept in the Folklore Linguistic Picture of the World (Case Study: Epic Genres)
The article investigates the ‘blessing’ concept in the Russian fairy-tale and epic tale. A comparative study of the ‘blessing’ concept characterized by different formulaic manifestations in various epic genres allowed singling out and describing peculiarities of the linguistic form and content of this concept in the folklore-linguistic picture of the world, which are stipulated by the socio-historical tendencies of the epoch when the fairy-tale and the epic tale were created, as well as by a different level of popular consciousness.
Keywords: folklore concept, folklore-linguistic picture of the world, formulaic dialogue, lexico-grammatical formulas, variation.

Ekaterina A. Kurlova
Dynamic Processes in the Content of “Dachnik” Associative and Semantic Field
The article presents the fragment of the associative semantic field rest, defined on the basis of segmentation of this field with spatio-temporal characteristics (continuous rest with the permanent localization change: vacation / holidays). Lexical semantic group subjects of the rest is allocated as a part of this fragment. The article analyses one of the designation of the subjects of the rest — Dachnik on the basis of the Russian associative dictionary edited by Yury N. Karaulov and various texts.
Keywords: associative semantic field, lexical semantic group, the world picture reflected in the language, spatio-temporal features, associative potential, contextual potential.

Tatiana A. Burmistrova
Lexical Opposition “A City — A Village”: Lexicographical Perspective
The article deals with the description of the lexical realization of the concepts “city” and “village”, and with eliciting probable dynamics in semantics of their essential nominations according to the linguistic sources and reference books. Occurrence of new names of a new type of populated localities widens the lexical realization of the concepts and reflects social and economic peculiarities of modern life which, to some extent, take off the established opposition between urban localities and countryside.
Keywords: lexical opposition, concept, lexico-semantic group, associative-verbal field, linguistic worldview.

Natalia A. Osmak
Problems of Lexicographical Description of Russian Spontaneous Speech (Based on Nominations of a Person in the Corpus of Spoken Russian)
The article represents a contrastive study, which aims to define trends of changes in functioning of linguistic units in speech as well as to analyze main problems of lexicographical description of Russian spontaneous speech. The analysis is based on the nominations of a person and includes material from Corpus of Spoken Russian “One Speech Day”.
Keywords: nomination of a woman, nomination of a man, spontaneous speech, corpus study, problems of lexicography.

Olga R. Lashchuk
Rewriting News Internet Messages: Methods of Composition Formation (Lenta.ru and NEWSru.com Case Study)
The results of research of composition of rewriter’s news messages of two Internet agencies are presented in article: Lenta.ru and NEWSru.com. The special attention is paid to a phenomenon of “lasting”, repeatedly edited messages. Specifics of modern news Internet materials are revealed: impossibility to provide observance of requirements to their composition with traditional methods. Taking into account the specifics a new technique of formation of composition of rewritwer’s Internet messages is offered.
Keywords: news agency, news message, composition, rewriting, editing.

Ravinder N. Menon
Slang Phraseology and its Speech Functioning
From the last quarter of the XX century a native speaker, free to choose a word, advantages one’s “new language sense” and a kind of “a new language fashion” development. It shoes itself in the intentional rejection of former stylistic norms, as well as in native speakers’ intention to make the speech more expressive, effecting and impressive. The article contains the means of slang phraseology formation, structural and semantic peculiarities as well as the problem of their variability are considered.
Keywords: Slang and jargon, formation of slang phraseology, structural and semantic peculiarities, variability.

Leonora N. Avdonina
“Depth by Granite Tightened…” (artistic figure of the Neva in Alexander Blok’s Poetry)
The article describes how the toponym Neva functions in Alexander Blok’s texts belonging to different periods of his work. The poet’s meditations on the world and humankind give a profound richness of content to the image of the Neva which is a St. Petersburg’s distinct symbol.
Keywords: toponym, aesthetically relevant image, periphrasis, metaphor, symbolism.

Natalia M. Marusenko, Tatiana G. Skrebtsova
Typical And Non-Typical In The Structure Of Detective Stories
The article is concerned with the structural analysis of detective fiction. The focus is on the significant features of classical detective stories and novels, as exemplified by the works of Arthur Conan-Doyle, Agatha Christie, Gilbert Keith Chesterton. Specific subject-matter and composition together with a prototypical set of characters constitute a frame of reference that highlights any deviations from the canonical structure. It is against this background that particular stories and novels violating the genre’s requirements are viewed, in particular Agatha Christie’s “The Witness for the Prosecution” and “The Murder of Roger Ackroyd”, as well as some detective novels by contemporary Russian authors.
Keywords: detective fiction, narrative analysis, story, text.

Natalia A. Vostriakova
Russian Romance and Problem of Its Perception Adequacy within a Foreigners
This article analyzes the potential linguodidactic of Russian romance as a form of a secondary communicative competence of foreign students in the process of Russian language learning. Considering the difficulties that occur in the representations of other ethnic cultures in the perception of the semantic content of romance.
Keywords: Russian romance, authentic text, text of romance, adequate perception of text, inophone (foreigner), secondary communicative competence.